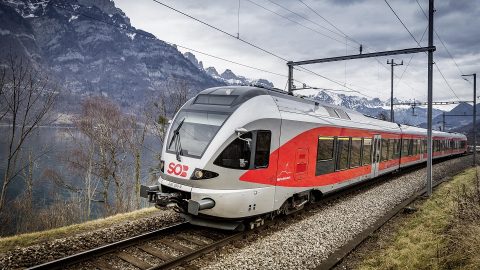 Stadler has signed a contract with Swiss regional rail company Schweizerische Südostbahn (SOB) for supplying twelve additional Flirt trains on Thursday. The units will enter service in December 2019. Initially, they will serve regional routes in south-east Switzerland operated by SOB. Later, they are expected to run on some long-distance lines.

The deal includes the delivery of seven eight-car, copper-coloured Flirt multiple units, called Traverso, and five four-car, silver-coloured Flirt trains. The Traverso units have a seating capacity of 359 passengers and consist of two class services. The trains are also equipped with two bistro areas and one designated family area. Traverso cars are convenient for disabled people and have a passenger information system with four to seven screens per unit. The four-car Flirts have a seating capacity of 197 passengers.

The deal is the second one between SOB and Stadler. The parties signed the first contract in June 2016 for the delivery of six eight-car and five four-car electric low-floor Flirt trains. They will replace old rolling stock serving the SOB regional lines, including the famous Voralpen-Express between St. Gallen and Lucerne. Moreover, Schweizerische Südostbahn will start to use the new Traverso trains on two long-distance routes: from Chur to Berne via Zurich from December 2020, and from Basel to Zurich from December 2021. These lines will be operated in cooperation with SBB.