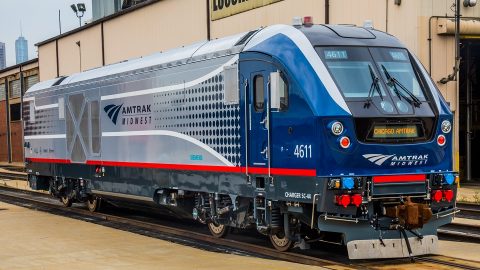 Siemens Mobility has secured two multimillion orders for supplying Charger diesel locomotives to North American carriers. The first deal worth 744 million Euros was awarded by US national railway operator Amtrak for the delivery of 75 locomotives. The other contract for 639 million Euros was signed with Canadian company Via Rail. It provides the supply of 32 trainsets powered by Charger diesel locomotives. Both orders will start being delivered in 2021.

All the ordered locomotives will be produced at the Siemens manufacturing facility in Sacramento, California. Amtrak will use the new locomotives on the long-distance routes that span the United States, both from north to south and east to west. Via Rail will operate the new trainsets on the Québec City – Windsor corridor, the busiest train service area and the most populated region in Canada.

The deal with Amtrak was signed on 21 December. It provides the delivery of locomotives in 2021-2024. The agreement with Via Rail was concluded on 12 December. The Canadian company will receive the ordered trainsets in 2021 and will operate them in 2022. The deals also guarantee services of technical maintenance and spare parts supply: a 20-year period for Amtrak as well as 15-year period for Via Rail.

Siemens manufacturing facility in Sacramento was established in 1980 to assemble light rail vehicles. In 2012, the plant was extended and upgraded for producing of locomotives. The first Siemens ACS-64 electric unit was accomplished in 2013. The supplier produced seventy units of this type for Amtrak in 2012-2015. Later, a transport company SEPTA operating in Philadelphia metropolitan area ordered fifteen Siemens ACS-64 locomotives. The first vehicle was entered into service this July.

The most popular locomotive type produced by Siemens in Sacramento is the Charger diesel unit. Today, more than seventy units serve passenger routes in North America. The major operator of Charger locomotives is Amtrak. Some regional railway companies such as Brightline also use this type of rolling stock. In earlier periods of the year, nine locomotives were also ordered for two rail commuter services to operate in different parts of California.