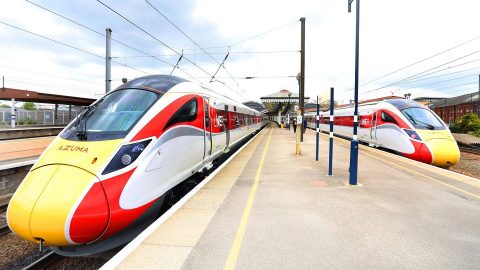 The UK government has surprised the travel market with the announcement of a snap sale of passenger train tickets, claiming to cut the cost of rail travel in half. Ministers say it will re-invigorate the passenger rail market, and get Britain travelling again. The whole truth however needs a little more explanation.

In what the UK government has called the first ever network-wide sale of rail tickets, over one million half price tickets will be available for journeys made across Great Britain between late April and late May. In what has been called the Great British Rail Sale, passengers will be able to book tickets from today (19 April) for cut price travel for journeys from 25 April to 27 May. However, as with all offers, some conditions apply and, just like all those bargain buys in the shops, it is only available while stocks last.

The pandemic has taken a huge toll on passenger numbers across the UK network. At the outset, passenger train travel was completely suspended, and no trains ran anywhere on the UK network. Only essential freight services continued, with the eerily empty tracks open to goods trains like never before. The government policy of banning travel and warning people to stay isolated may have worked in managing the Covid-19 pandemic, but it put a sense of lasting fear in the population.

Ever since then, passenger numbers have been deeply suppressed. The triple message of “stay apart, stay home, save lives” has had a lasting affect on British society. Leisure and commerce gatherings were completely banned, and office workers have become hermits, confined to their spare bedrooms, with laptops as their only connection to the outside world. Nowhere has that societal change been more apparent than on the public transport network.

Very early in the pandemic, the entire railway network was effectively renationalised to avoid complete collapse. The private company franchises were suspended, and the network was brought under government control. That state of affairs has persisted, and hastened the formation of Great British Railways, effectively a new infrastructure and passenger railway authority, taking control of the whole network – with the exception of some devolved transport powers in Scotland, Wales and Northern Ireland.

However, despite huge sums of money being ploughed into supporting network passenger train operations, and high-profile subsidies to operators like Transport for London – the capital’s integrated public transport authority – passengers have remained reticent to get back on the rails. That has proving a lasting headache for the government and something that threatens the long-term financial sustainability of the existing rail network.

One passenger in every two carriages

Passenger numbers have begun to recover, but not nearly fast enough to satisfy the government’s desire to see society return to pre-pandemic levels of travel activity. The government in London has encouraged office workers to stop working from home, and is leading the way with a call today for civil servants to set an example. However, only around two-thirds of pre-pandemic passengers are actually using the railways, and that is not enough says the government. That, say ministerial sources, is what the Great British Rail Sale is designed to fix, but already critics say it does not go nearly far enough.

The transport secretary Grant Shapps has said that over one million half price tickets will be made available for off-peak travel during the coming month. That seems generous, but even at current levels, that is just a drop in the ocean. With about 150 million journeys being made every month, that represents about one per cent of all journeys on Britain’s railways. Put it another way, for every two train carriages, you might expect to meet one person with a sale ticket.

Hardly surprisingly, the industry has given the so-called sale a muted response. Operators say the government initiative is welcome, but needs to go much further. Couple that with the sudden announcement – which has not pleased passengers who have already bought tickets for journeys in the coming month – there is the possibility of suppressed demand, in the hope that further sales will be announced. That could make rail travel appear even more expensive – since early-bird tickets have always been available, offering far better bargains than the Great Sale.

“Cutting the cost of rail travel will help ease some of the pressure on family finances at a time when inflation is rising around the world”, says an optimistic statement from the government’s department for transport. “It will also encourage people to visit different places, connect with friends and loved ones, and get out and about around the country. However with living standards falling faster than at anytime since the Second World War, there are genuinely more urgent priorities for millions of Britons, and no matter how cheap trail travel may be, a trip to the supermarket may be all that can be afforded for many.

Portsmouth to Penzance anyone?

There are some genuine bargains to be had – if you are quick enough to book. A journey between Edinburgh and London – which can cost around 150 pounds (181 euro) for the 400-mile (640km) trip, can often be booked for 44 pounds, but will be available for 22 pounds under the scheme. “We want everyone to be able to benefit from travelling by train because it’s more than just a journey, it’s a way to connect everyone to the people, places and things they love.”, said Jacqueline Starr, CEO of the Rail Delivery Group, the representative body for rail operators in the UK, “As part of the Great British Rail Sale customers will enjoy over one million discounted tickets, so they can explore some of the fantastic locations that are accessible by rail.”

Despite the government’s claims, ticket sales are nothing new on the British network. However, this is the first network-wide sale since the days of British Rail, which was abolished in the privatisation of the 1990s. The government’s publicity has noted several example fares. Certainly, the prospect of a trip between the capitals of Scotland and England for 22 pounds should be an attractive proposition – but how many may make the circuitous journey between Portsmouth Harbour and Penzance for the same fare remains to be seen. The consensus is that the Great British Rail Sale needs to be much greater to have any great effect.