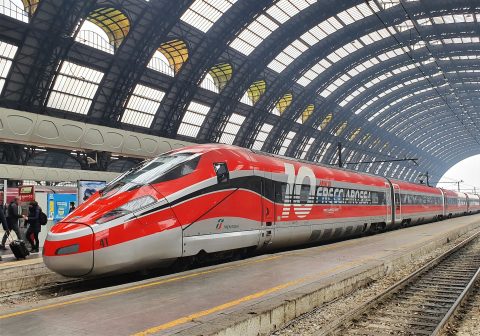 Trenitalia has started operation of its first high-speed train service between Milan and Paris. The public company is thereby directly competing with another: French state railways SNCF. Looking back at this year, there have been quite some developments in the European rail market, across borders.

The year 2021 has been rich in new long-distance rail service launches in Europe. New trains have appeared in Spain, France and on the segment of night trains. What these new services have in common is that many are initiatives by public companies.

It would seem that the amount of challenges that need to be overcome to establish a new service abroad is such that a solid base of rail expertise and for example rolling stock is vital. This is more the case for incumbent companies than for new operators, which face several barriers.

The SNCF is one of the operators that quickly understood the advantages of being present on foreign markets. In the early 1990s, it was able to benefit from the monopoly of ideas through the Alstom TGV by succeeding in imposing it between Paris and the Benelux countries with Thalys, and between Paris and London with Eurostar.

As the French culture is not really oriented towards liberalisation, SNCF has always favoured forms of cooperation with neighbouring operators, such as the Lyria TGV between Paris and Switzerland, Alleo between Paris and the south of Germany or Elypsos between SNCF and Renfe, in Spain.

This has not prevented SNCF to see how a private railway company operates, by taking shares in several companies, giving it access to the board of directors and accounting documents. With this experience, it was able to draw conclusions and seize opportunities, for example by creating the low-cost brand Ouigo internally. This experience enables it to compete out of France with other operators.

The strike force of the SNCF, which has a large fleet of TGVs at its disposal, de facto has an advantage over new private entrants. SNCF was able to obtain the third of three high-speed lots in Spain, guaranteeing their service Ouigo Spain with trains that had already been built and that only had to be technically retrofitted.

The same situation has arisen with the other Spanish competitor, the private company Ilsa. Despite its initial wishes, it was not able to get high-speed trains quickly to operate Lot 2. In the end, it allied itself with the public operator Trenitalia, because the Italian company has a large strike force and undeniable know-how. The two shareholders are now Trenitalia and Air Nostrum, a Spanish regional airline.

This allows a major rival of SNCF to compete in Spain, where SNCF itself has also entered the market. Looking at the Spanish liberalisation, the three competitors present, along with Renfe, are all public operators, or backed by them.

It could be seen as unexpected. The Italian operator Trenitalia, which suffered from an image deficit 20 years ago, has become a company with an international strategy.

The operator has launched a subsidiary to operate regional traffic in Germany and Great Britain. In 2019, it joined forces with First Group to operate the prestigious London-Glasgow route, following Virgin, naming the service ‘Avanti’, which is clearly an Italian name.

Now Trenitalia feels strong enough to operate without partners. Helped by the staff of the Thello company in France, Trenitalia was able to set up an operation that competes directly with SNCF.

With its five Frecciarossa trains now approved for the Paris-Lyon high-speed line, Trenitalia was able to start solo operation of a Milan-Paris service via Lyon. The law also allows it to sell Lyon-Paris tickets on the domestic service, which is revolutionary in France.

Further analysis shows that it is yet another incumbent that has made its mark over the last five years. The Austrian ÖBB has launched its Nightjet night trains throughout Europe, a niche market in which the major operators no longer believed.

The success of the Nightjet model is unquestionable and the company’s management never misses an opportunity to demonstrate the company’s know-how in the media. Austria thus succeeded in making a name for itself throughout Europe.

To finish this overview, the absence of Deutsche Bahn in this great European game (with the exception of its subsidiary Arriva) stands out. It is true that DB’s Intercity trains operate in the Benelux countries, France and Switzerland, but not in Italy or the Czech Republic, two destinations that are nevertheless popular with German customers.