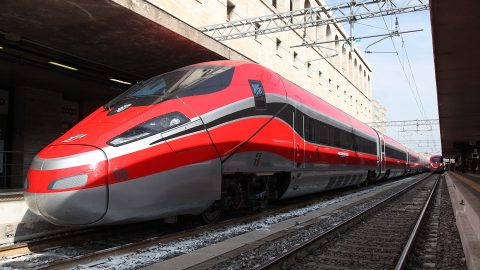 Trenitalia brings the Frecciarossa to France

The first ride of the Frecciarossa high-speed train will depart from Milano Central station towards Paris on Saturday 18 December. It will compete with the French railways SNCF on the route between France and Italy.

As for the high speed of the trains, “after the period marked by Covid, the service must resume running to connect the large centers in the shortest possible time”, said Luigi Corradi, CEO of Trenitalia. In fact, during the health emergency, an attempt was made to provide a service to as many passengers as possible, making the high-speed train stop in more stations to help people get around. “Today, high-speed ​​is going back to stop as little as possible, on the Milan-Rome line we are returning under three hours of travel”.

Back on the section, and with high-speed

“We are very proud to present our new offer to French travelers”, commented Corradi. “We have been operating for more than 10 years with Thello, now Trenitalia France, and we have a great deal of network experience in France. Now, with high-speed on a historic axis, we enter a new dimension, at the service of mobility and the comfort of travelers.”

Thello was founded in 2011 as a joint venture between the Italian national railway company Trenitalia and the French transport group Transdev. In 2016, the shares of Transdev (33%) were sold to Trenitalia, which became the full owner. First, night trains were operated to Italy, and in 2014, daytime trains were introduced between Marseille, Nice, Genoa, and Milan. However, due to the coronavirus pandemic, these services were suspended in the summer of this year. Now, faster trains from Italy will run to France instead.

Competition with other national railways

AllRail, the association of independent passenger rail companies, is happy with the fact that Italian incumbent FS will start competing against French incumbent SNCF on long distance services between Milan and Paris, saying it must be “a shining example for the rest of Europe.”

“In the EU Single Aviation Market, it would be unthinkable for each country’s dominant airline to collude with each other. So why is this still allowed in passenger rail?”, said Secretary General Nick Brooks. “There is a better solution: competition.”