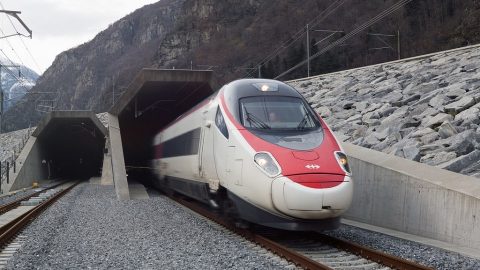 Swiss Federal Railways (SBB) has resumed the long-distance international trains to Italy. From Monday, 29 June, they are available for the customers who want to travel from several cities in Switzerland to Milan. It is the second stage of relaunching the train traffic between two neighbouring countries.

The reopening of the cross-border train traffic between Switzerland and Italy started in mid-June. Initially, both countries relaunched the TILO S-Bahn-like cross-border regional connections between the Swiss canton of Ticino and the Italian Region of Lombardy. Now, it’s the turn of the long-distance international trains. They have returned to the cross-border services on Monday, 29 June.

As a result, two key railway tunnels in Switzerland, Gotthard and Simplon, are serving the international traffic. Five daily EuroCity trains run via the Gotthard Base Tunnel and carry the passengers from Zürich or Basel to Milan and back. Another route via the Simplon Tunnel has four international trains to Italy: two from Geneva via Lausanne and two from Basel via Bern to Milan. Two other phases for reopening the cross-border train traffic between the countries are scheduled for mid-August and early September. This process will be completed on 7 September when the daily train between Switzerland and Venice will return on tracks.

The ICE high-speed connection between the German city of Cologne and Basel was also resumed on 18 May. In late May, many international trains from Germany to Switzerland started to run again. On 2 June the cross-border trains of the Railjet type were relaunched between Switzerland and Austria. Since 25 June, both countries have been again linked by the night trains.