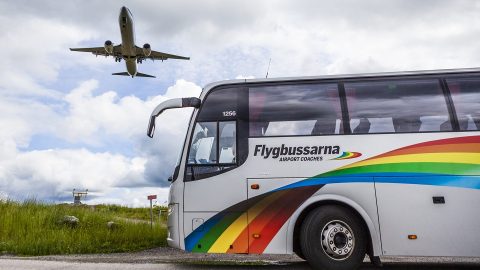 Norwegian railway operator Vy has strengthened its bus business. It acquired Flygbussarna, the bus operator in Sweden focused on service to and from airports. With this deal, Vy (former NSB) will become the largest bus operator in the Nordics.

Vy purchased Flygbussarna from Transdev, a French-based international mobility company in the mid-December 2019. The agreement is required to be reviewed by Swedish antitrust authorities during the first quarter of this year. Transdev sold its subsidiary due to a new strategy adopted in 2018. The document provides a focus on B2B transportation by exiting the B2C market.

In the past two years, the French company has vended most of its B2C operations. “In line with Transdev Group’s strategy to concentrate on its traditional markets of public transportation and B2B market, we are pleased to have found in Vy Group the best buyer for Flygbussarna, our successful Swedish airport coach services,” said Thierry Mallet, CEO of Transdev Group.

For Vy Group, the new acquisition is a part of its own growth strategy. As of today, the Norwegian company provides the bus services in Sweden under the brands of Vy Bus4You and Vy express. They are performed by Vy Travel, a subsidiary of Vy Buss (bus division of Vy Group). “Vy’s ambition is to be the leading transport group in the Nordic region. With the purchase of Flygbussarna Airport Coaches, we become the largest commercial bus company in Sweden. We share Flygbussarna’s passion for customer service, and will continue to develop our transport services in the Nordic countries together with our customers,” noted Geir Isaksen, CEO of Vy Group.