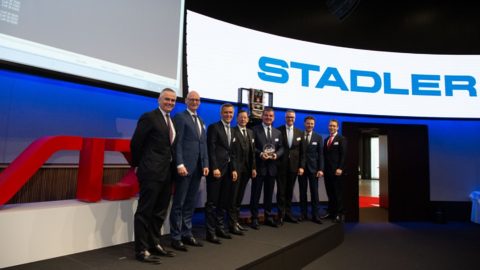 Rolling stock manufacturer Stadler Rail has made its successful debut on the SIX Swiss Exchange on 12 April. The company’s shares issued at a price of 38 Swiss Francs (33.5 Euros) were traded at an average price of 42 Swiss Francs (37 Euros). The maximum price during the first day has set a record of 42.895 Swiss Francs. Trading on Monday, 15 April, has started at 43.20 Swiss Francs.

The initial public offering (IPO) of Stadler Rail includes 35 million shares owned by the company’s CEO Peter Spuhler. The basic offer implies a market capitalisation of 3.8 billion Swiss Francs (3.35 billion Euros). At the IPO start, this amount has increased up to 4.2 billion Swiss Francs (3.7 billion Euros). Besides the basic offer, Stadler Rail plans to trade an over-allotment option for 5,2 million shares on 16 April.

“The IPO on SIX is a logical next step in Stadler’s growth story. It will help us in further strengthening of the Stadler’s long-term competitive position in our markets through innovative products and technologies and to support the future development of the company,” Peter Spuhler noted.

Stadler Rail has published an offering memorandum on 29 March. The bookbuilding was carried out on 1-11 April. The Joint Global Coordinators and Joint Bookrunners are Credit Suisse and UBS. The other participants of the IPO proceeding are BNP PARIBAS, Citigroup, Zürcher Kantonalbank, UniCredit Bank AG, Reichmuth & Co, St.Galler Kantonalbank and Thurgauer Kantonalbank. Peter Spuhler will remain his post and will hold 39.7 per cent of the share capital of Stadler.