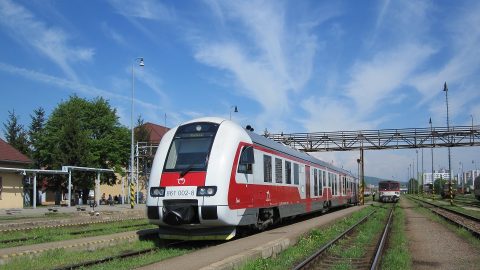 The national railway companies of Slovakia and Ukraine are discussing the launch of a new passenger train between the countries. The new service will connect Košice, the second largest city in Slovakia, with Mukachevo, an important railway junction in the Transcarpathian region of Ukraine. The Košice-Mukachevo train will run via a dual gauge railway and not require a bogie exchange.

The test ride of the Košice-Mukachevo train is expected to carry out at the beginning of April. The launch of regular service is scheduled for June. The approximate travel time will be 4 hours. The route will be served by the Slovak national passenger operator Železničná spoločnosť Slovensko (ZSSK). “A new rail link between Mukachevo and Košice will help to improve transport and make this region more attractive for tourists,” the Slovak Minister of Transport, Construction, and Regional Development Arpád Érsek said after the negotiations with its Ukrainian counterpart Volodymyr Omelian.

Košice railway station is located just 90 kilometres from the Ukrainian border. Czech railway companies Leo Express and RegioJet use it as a connection hub to their train services. In October 2015, Leo Express launched the Košice-Mukachevo bus service to drive passengers from Ukraine to Košice railway station where they can get on a train to Prague. Later, this link was extended from Mukachevo to Rakhiv, a mountainous city in the eastern part of the Transcarpathian region. In April 2018, RegioJet, another Czech private operator, launched its own bus service between Košice and Mukachevo.

The direct train connection between Ukraine and Slovakia is underdeveloped. ZSSK has only one daily passenger train linking Košice with Ukrainian border station of Chop. The other service is a daily direct sleeping wagon that runs from Kyiv, capital of Ukraine, to Košice operated by Ukrainian Railway (UZ).