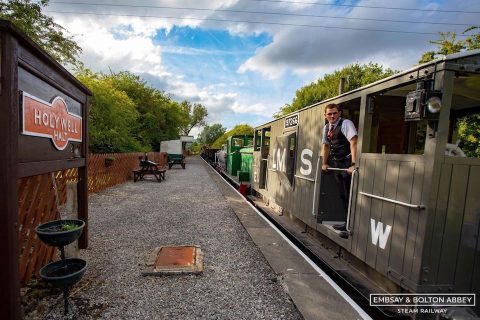 Mixing new tech with old tech, a railway that specialises in preserving steam locomotives from bygone ages is leading the way with a vast solar array that will generate power for the railway and significantly cut operating costs. The technology of solar power will compliment steam power in the heart of Yorkshire, at the Embsay and Bolton Abbey Railway, where passenger trains and demonstration goods workings provide a popular and now even more environmentally friendly tourist attraction.

The Embsay and Bolton Abbey Railway, which already has a commercial partnership with diversified energy company Squirrel Energy, plans to install just over seven hundred solar panels to take their off-line energy requirements off-grid. Their main attractions will still be coal-fired, but their base load electricity could be generated in-house, from panels on the south-facing roofs of all their buildings.

Panels on the engine shed roofs

Heritage railways are a widespread and popular tourist attraction in the UK. The heritage industry is particularly well served by the vast variety of steam traction used over the years in the UK. Despite the possible environmental benefits, there is no plan to convert any historic locomotives to battery power. Instead the railway, near Skipton in North Yorkshire, aims to preserve its viability, despite a tripling of electricity costs.

Speaking to local media, Malcolm Harrison, who is a director at the railway, said that utilising the roof space of their buildings was an opportunity to reduce the carbon footprint of the operation, at a time when are energy costs are, as he put it; “About to go through the roof.” The railway would however benefit from the UK government’s energy price cap scheme, designed to keep small businesses from going bust in the current crisis.

Commercial partners Squirrel Energy, pride themselves in a live tracker of energy generation in the UK, note that around four percent of the UK’s thirty gigawatt power supply originates from solar power. That’s about an eighth as much as is produced from gas-fired power stations. The installation at the Embsay and Bolton Abbey Railway will not significantly change that ratio, but it will radically amend the running costs at the railway.

Harrison told the regional morning newspaper that annual electricity costs at the railway were about to triple from thirty thousand pounds (37,500 euro) to 90,000 pounds (107,000 euro). He says there are a long list of projects that can benefit from redirected funding, including rolling stock refurbishment and staff facilities, including the restoration of a historic brake van. Brake vans were once a ubiquitous safety measure on Britain’s railways.

The railway employed local drone company Networx3, to survey the engine and carriage sheds, quickly and efficiently, providing high quality images of the roof in preparation for solar panels. Using a drone was an extremely cost effective and simple way to survey the roof, compared to using personnel working at height around a busy railway operation.

The railway’s solar solution will also use innovative facilities from Squirrel Energy, to exchange energy with other renewables generators and consumers, allowing some of the excess solar energy produced in the summer, to offset other renewable energy bought in to satisfy their winter and night-time supply, resulting in the railway having a surplus of energy across the year, resulting in an income, rather than having any future electricity bills.

Just as soon as the panels are in place, the drones can be recharged from the railway’s own supply – although the company may just plug them in, in the meantime.