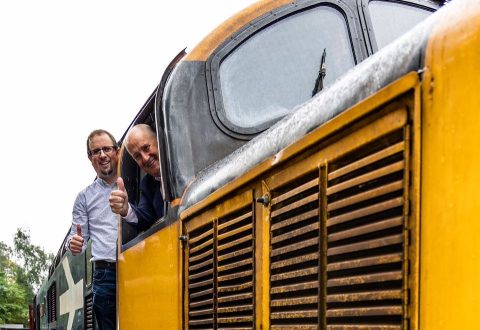 A string of UK politicians have expressed their support to this summer’s Love Your Railway campaign. Among them, is Nigel Huddleston, the member of parliament for the Mid Worcestershire constituency, and the minister for tourism. That support has encouraged organisers that this year’s event will be the most successful yet.

Love Your Railway shines a spotlight on heritage railway organisations across the UK. These preserved railways, located throughout the British Isles, are popular tourist attractions and serve as important learning resources and community facilities. The heritage railway sector was among the worst hit part of the tourism indusrty during the pandemic. The Love Your Railway campaign is designed to raise awareness and encourage re-engagement with the sector.

The campaign has been spearheaded by the North York Moors Railway (NYMR), which is one of around eighty participating locations and special interest groups. Love Your Railway has a six-week run, concentrating on the summer school holiday season. Making up the campaign, there are a series of weekly themes cover history, conservation, partnerships, family, volunteers and education.

The highly technical workings of historic and near-contemporary steam locomotives, coupled with the engineering complexity of running a railway – either modern or preserved, has captured the imagination of more than the visiting customers. Kevin Hollinrake, MP for Thirsk and Malton, took time out from his constituency work, to visit the NYMR. “I am pleased to support this brilliant yearly campaign once again”, he said.

Hollinrake is the latest politician to show their support for Love Your Railway. He is joined by, among others, Nigel Huddleston another MP and the Minister for Sport, Tourism, Heritage and Civil Society. His Mid Worcestershire includes the northern terminus of the Gloucestershire Warwickshire Steam Railway; and Chris Heaton-Harris, a previous transport minister and the MP for Daventry, including the Daventry International Railfreight Terminal.

Lucy Allan, the MP for Telford (covering the Telford Steam Railway); and Dr Daniel Poulter, MP for Central Suffolk and North Ipswich (for whom Felixstowe is a close neighbour), have engaged with the heritage railway summer campaign. Many other politicians have collaborating heritage organisations in their constituencies, giving the sector widespread parliamentary opportunities for support.

The heritage railway sector plays a wide part in the economy at large. While there are no heritage freight operators, there are examples of heritage rails allowing rail freight to pass. Indirectly, lines up and down the country have also proved ideal filming locations. Among them, the NYMR has featured in the globally popular Harry Potter movies.

“After another challenging year for the sector. Love Your Railway shines a spotlight on our iconic rail history”, added Kevin Hollinrake. “With summer drawing to a close, it’s even more important to keep supporting heritage railways into the autumn and winter months and ensure [the sector] survives for future generations.”