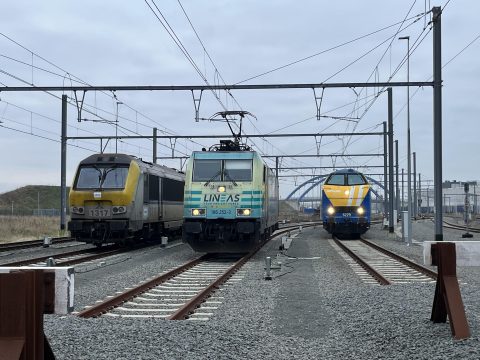 Belgian infrastructure manager Infrabel on Monday inaugurated the new shunting yard in the Port of Zeebrugge. The project, labelled the ‘biggest in the history of the port’ by the various stakeholders, took 12 years to complete at a cost of 133 million euros. More than 18 kilometres of new tracks were installed.

The new shunting yard of the port of Zeebrugge consists of two large track bundles: the departure and arrival bundle Zwankendamme and the shunting bundle Zeebrugge. Zwankendamme’s infrastructure had already been modernised and was completed at the end of 2018. Now the finishing touches have also been made to the Zeebrugge shunting bundle.

The entire overhaul saw the installation of 45 switches, 27,500 new sleepers, 16 kilometres worth of overhead lines and 60 kilometres of cables. There are now 18 tracks in total. The Zeebrugge marshalling yard has eight tracks, four of which have overhead wires. Three tracks in the bundle are long tracks, where trains of up to 750 meters can be received.

The Zwankendamme bundle has ten electrified tracks, four of which are long tracks. In addition to these tracks, there is a separate bundle of 4 tracks where Infrabel customers can temporarily park their locomotives. In the past, locomotives were parked in the shunting yard, which resulted in a loss of capacity. The new infrastructure also has an automatic hill installation and automatically operated switches. Such a system speeds up the shunting and composition of freight trains.

Both track bundles are now located behind each other, while they used to be on the other side of the main Bruges-Zeebrugge track. Now that trains have to cross this line much less often, more capacity will become available and freight trains will have to make fewer shunting movements.

An extensive version of this article previously appeared on Railtech.be. Would you like to know more about the rail infrastructure from, to and in the Belgian ports? Then have a look at RailTech Belgium, where this topic is one of the main themes. Click here for more information.