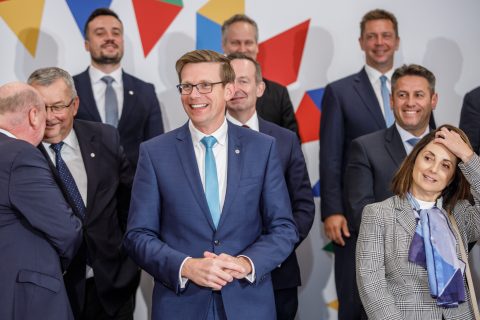 The transport ministers of the EU countries talked about the development of high-speed rail lines in different parts of Europe at an informal meeting in Prague on Friday. Currently having the presidency of the Council of the European Union, the Czech Republic has major plans for high-speed rail, and the European network will likely extend more to Eastern Europe in the future, which also Poland and Hungary advocate.

“The strengthening of transport relations will undoubtedly contribute not only to easier movement of people, but will also improve economic and social links both within the EU and beyond. We need to find ways to make rail transport more efficient and attractive for passengers”, said Czech transport minister Martin Kupka. “After the constraints caused by the covid-19 pandemic, we are seeing an increasing interest in travelling, but at the same time we are seeing obstacles to greater use of railways, especially in cross-border connections”.

High-speed rail in Czech Republic is a big area of emphasis the country, with plans for the construction of five new lines, including cross-border ones to Germany and Austria. They are to connect Prague, Brno and Ostrava with Berlin, Vienna, Bratislava, Katowice and Bavaria (Germany). The ‘Fast Connections’ development programme  approved in 2017 envisages the creation of up to 700 kilometres of new high-speed lines in Czech Republic.

Czech Republic wants to introduce railway lines to Germany, Austria or Poland. According to Kupka, a number of sections, especially cross-border sections, are missing from the European backbone railway network. Completing them will mean finding money both at the European and national level, he said.

In addition to the Czech connection with Germany, Austria and Poland, high-speed connection between Lyon and Turin, Madrid and Paris, Amsterdam and Berlin are also still missing, as well as the connection of the railway networks of Ukraine and Moldova. For some of these there is currently a direct connection, such as Amsterdam – Berlin, but this is not high-speed rail, as the journey takes more than 6 hours. Dutch Railways and Deutsche Bahn have pledged to shave off 30 minutes of travel time by from December 2023 onwards.

The director general of the European Commission for mobility and transport, Henrik Hololei, assured that there is enough money to finance the high-speed European network. According to him, the main source is the Connecting Europe Facility program, which spends 75 percent of its funds on railways, including high-speed projects. “In addition, financing by the European Investment Bank is offered, but it is also necessary to involve co-financing from the national sources of individual countries”, he said.

According to the Minister of Infrastructure Andrzej Adamczyk, Poland’s priority is a fast rail connection between Katowice and Ostrava, as well as the completion of the highway from Poland to Jaroměř and Hradec Králové, reported Czech tv channel CT. A main priority is also a new central transport hub between Warsaw and Łódź for air, rail and road transport.

Hungarian State Secretary for Transport Dávid Vitézy considers the high-speed connection between Budapest and Bratislava and via Prague to Berlin to be a Central European transport priority. “High-speed rail connections in Central and Eastern Europe are an important missing link in the European backbone network.”

After discussing the development of high-speed rail lines in different parts of Europe at the meeting in Prague, the ministers also discussed the direction of further investments from European Union funds, and addressed the inclusion of some new links in the TEN-T pan-European backbone transport network and better rail connectivity. The draft revision of the TEN-T network then envisages the elimination of those links located on the territory of Russia and Belarus and, on the contrary, the inclusion of transport corridors in Ukraine and Moldova, including the possibilities of switching to standard gauge. Later, the energy crisis and possible measures to support rail were discussed.