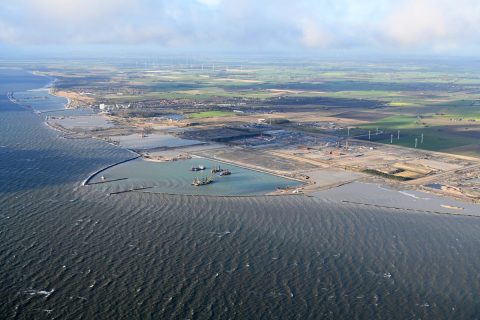 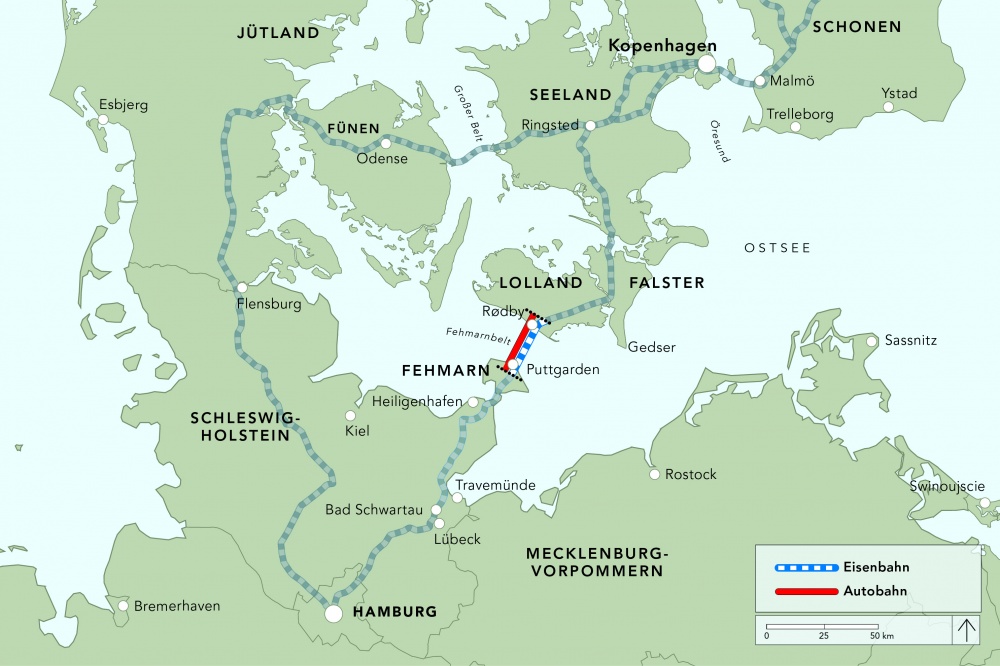 The Fehmarnbelt tunnel, ‘Europe’s new shortcut’, is a 18-kilometre-long tunnel that will connect Denmark and Germany from 2029. These countries are already connected by land, but to reach the Danish capital Copenhagen and continue on to Sweden, the route via land through Jutland is quite a detour.

Works in Denmark were already underway, and in September 2021, the excavation of the tunnel trench also started in the German part of the Fehmarnbelt. In October, construction of the coastal facilities in Puttgarden started, to the east of the terminal where currently the ferry to Denmark leaves.

From 2029, the journey through the Fehmarnbelt tunnel will only take seven minutes by train and ten minutes by car. The current ferry takes about half an hour and goes every 30 minutes. The train from Hamburg to Copenhagen will take less than 3 hours, a journey which is currently 4,5 hours.

Construction of the coastal facilities east of the Puttgarden ferry port began in October. First, the outer retaining dam is being built as part of the tunnel portal. Then the first parts of the German working harbour and the land reclamation area will follow.

On the German side, the construction site is much smaller than on the Danish side. A temporary port is being constructed on both sides, but on Danish side in Lolland, the major production of the 89 steel-reinforced concrete tunnel elements will take place. There will just be a construction site for the tunnel portal in Germany.

Harbour for the materials

The construction site for the Fehmarnbelt tunnel at Rødbyhavn in Denmark is ready. This area includes the location where later the tunnel elements will be produced and accommodation for the construction workers, as well as roads to and from the production facilities.

In the meantime, the work harbour at on the Danish side is taking shape. Breakwaters have been constructed, and dredging of the access channel to the harbour and the harbour basin is taking place. Several livestreams of the works in Rødbyhavn are being streamed with a webcam, so when it is not raining the bustling on the construction site can be followed.

“Simson”, as seen in the image above, is one of the largest backhoe dredgers of the world, and is in operation for dredging of the access channel and the harbour basin at Rødbyhavn. Its reach is more than 20 metres and a shovel of 34 m³. Excavated material from the port basin will be reused to reinforce the dikes that form the boundaries of the new land reclamation areas, which will be made with the excess soil from digging the tunnel trench. 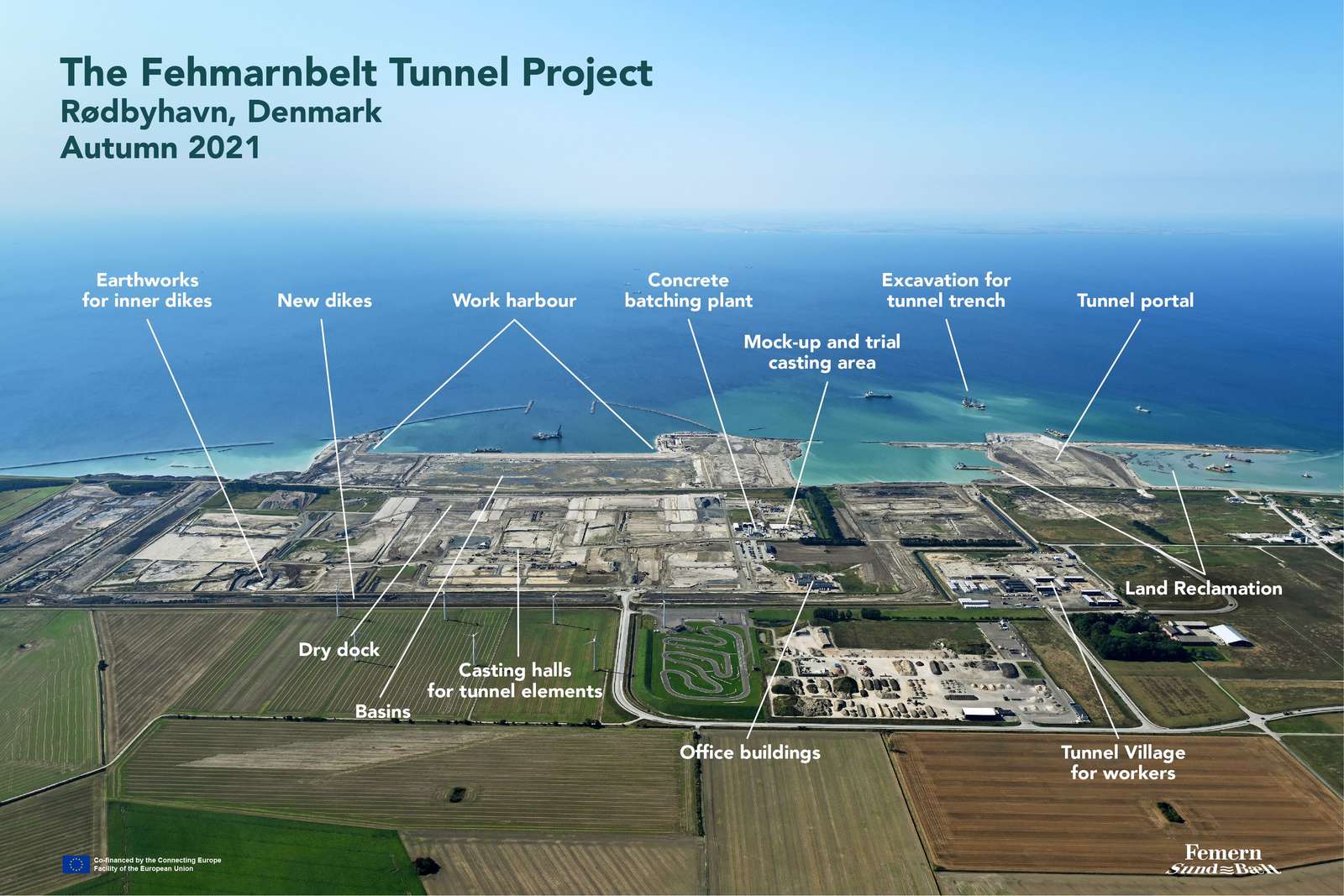 The harbour will be used for shipping in the large quantities of building materials to be used for the construction, as well as to tow the finished tunnel elements out to the Fehmarnbelt. Supplies and raw materials for the construction will, to a large extent be delivered by sea. It is being built by the Dutch consortium, Fehmarn Belt Contractors (FBC), and is expected to be completed by the end of 2021. FBC is a joint venture between the two Dutch dredging and marine contractors Boskalis and Van Oord and responsible for various dredging and hydraulic engineering activities.

Dredging for the tunnel

Since July, the trench in the Fehmarnbelt is being excavated, and since September, this work has also been underway on the German side. Cable grab dredgers, backhoe dredgers and a suction hopper dredger are being used.

The dredged trench from Denmark to Germany needs to be 17.6 kilometres long, up to approximately 90 metres wide and 16 metres deep. This is where the tunnel elements will be immersed, connected and covered. Surplus material from the dredging will be used for the construction of new coastal areas near Rødbyhavn and to a limited extent on Fehmarn in Germany.

The new land areas will be created on an ongoing basis as soil from the seabed is dredged. On both sides, they will generally extend around 500 metres into the Fehmarnbelt. This is about the same distance from the shore as the piers of the existing ferry ports at Rødbyhavn and Puttgarden. When the trench on the seabed is finished, the tunnel elements which will be pre-made on the site in Denmark will be immersed and connected to each other under water.

The Fehmarnbelt link will be the world’s longest immersed tunnel when it’s finished in 2029. The Øresund tunnel, part of the fixed link with a bridge between Copenhagen and Malmö in Sweden was built with the same technique.