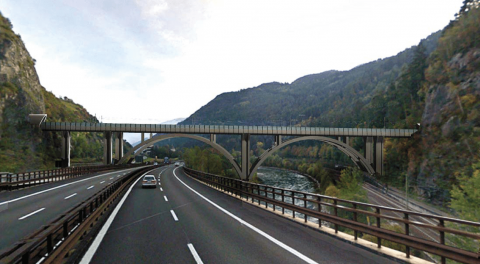 Rete Ferroviaria Italiana (RFI) has awarded the first section of the extension of the Brenner Base Tunnel for 22.5 kilometres on the Italian side of the Alps. Webuild and Implenia Construction have been assigned the 1.16 billion euro project, which will eventually quadruple the track between Fortezza and Ponte Gardena along the Munich-Verona railway axis. When completed, it will reduce travel times for trains carrying people and goods.

The new Fortezza – Ponte Gardena line is a continuation of the Brenner Base Tunnel,  a 55-kilometre-long railway tunnel under construction through the base of the Eastern Alps connecting Italy with Austria. Expanding the track on Italian side will strengthen the Verona – Innsbruck – Munich axis within the European TEN-T Scandinavian-Mediterranean railway corridor.

The entire 180 kilometres from Verona to Fortezza, where the Brenner Base Tunnel starts, will be quadrupled. This project is divided in four parts, of which the first is now awarded. Webuild will be the Consortium Leader, and Implenia Construction GmbH the Principal Consortium will have the task of developing the executive project and subsequently carrying out the work. These works are expected to take seven years to complete.

The awarded works consist of the construction of 22.5 kilometres of new double-track railway line. The route develops mainly underground, with two double-tube tunnels, Scaleres and Gardena. These tunnels are respectively 15.4 and 6.3 kilometres long, and are connected by a bridge over the Isarco river. Furthermore, the works include underground interconnections and urban planning interventions at Ponte Gardena.

The interventions will allow a significant reduction in travel times for both passenger and freight trains. The elimination of bottlenecks and constraints linked to the maximum gradient on the Brenner axis will also allow an increase in traffic capacity on the line. Construction of the Brenner Base Tunnel started already in 2008, and is currently scheduled to be finished in 2028.

An important aspect of infrastructure improvements will be the radical reduction of the maximum gradient. On the Fortezza-Verona line, the maximum gradient will be reduced from the current 23 ‰ to 12.5 ‰. In the Brenner base tunnel itself it will be contained within 7 ‰. The currently high gradient of the infrastructure limits train speed to within 80 kilometres per hour in the most tortuous sections. Less gradient will also allow the passage of heavier freight trains.

When all the planned works including the tunnel are finished, it will be possible to separate the freight traffic flows from passenger flows. Among these, long-distance services can be separated from local ones, with enormous benefits for passengers. More freight transport capacity will mean up to 60 – 90 more trains per day, according to RFI. The reduction of the constraints due to gradients will promote the use of longer and heavier trains with an increase in the transportable load of about 20 percent for each train.

Resources under the Italian National Plan of Recovery and Resilience will be dedicated to modernising the country’s infrastructure and create jobs, deemed the real emergency of the economic recovery. The project is forecast to lead to the creation of 15,000 jobs, both directly and indirectly, as well as along the entire supply chain and across the local economy.