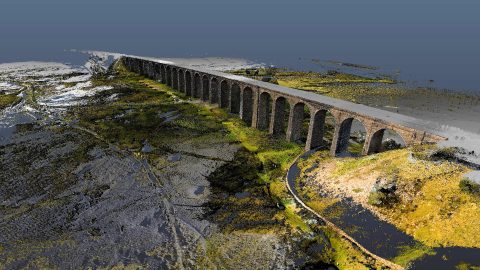 British railway infrastructure manager Network Rail has released the 3D footage of the Ribblehead viaduct that has been mapped out with laser scanners and drones to help with the restoration. The North Yorkshire Victorian viaduct is 144 years old and is undergoing maintenance work to improve and secure passenger and freight journeys on the 400-metre Settle-Carlisle railway.

“We’re always looking to innovate on the railway and seeing drones and lasers being used to care for such a historic structure is really impressive,” explains Phil James, North West Route director of Network Rail. The viaduct is listed as a Grade II structure with an investment of 2.1 million British pounds, which is part of the Great North Rail Project. It was opened in 1876 for the purpose of bridging the game between Ribblheas and Dent on Batty Moor.

The maintenance work will take place between now and February 2021 will not cause passenger disruption to the Settle-Carlisle line. The work will involve brickwork repairs, removal of vegetation to repair the damage caused by plants and weeds, drainage upgrade on 24 arches and the repainting of metal and pipework.

The technology of laser scanners and drones have been used to map every inch of the viaduct to partake on the upgrade of the brickwork and drainage system. The railway’s LIDAR data survey and photographs were used to build a 3D computer model by Network Rail’s CAD team.

The digital recreation has been done to help engineers perform repairs and monitor areas that need attention in the future. “I was at Ribblehead viaduct when we started work a week ago and saw for myself the huge scaffolding platforms now in place so my team can improve brickwork, mortar and drainage,” adds James. “Great care and attention are going in to make sure our work is right from a heritage perspective.”