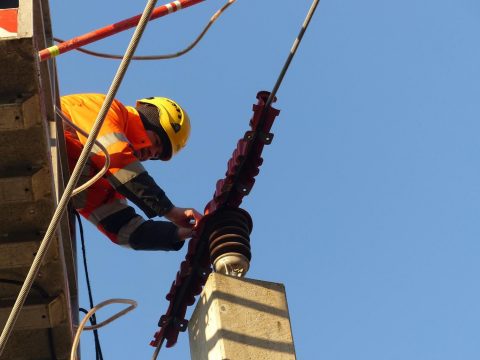 Austrian rail infrastructure manager ÖBB-Infrastruktur AG has installed special insulation caps, glass shields and markings on parts of the S7 railway line to protect birds from electrocution and other hazards. ÖBB-Infra partnered up with the Donau-Auen National Park for this and is part of transnational LIFE Danube Free Sky project which is dedicated to species protection.

Large birds often perch and stand guard on catenary masters of railways. For this reason, 20,000 specially developed insulation caps have been installed in the entire ÖBB route network. In a few parts viewing windows were also hung overhead the line. Additionally it is now standard measure for old and new buildings with large glass surfaces to be equipped with bird protection markings.

All relevant glass panes at train stations and stops of the S7 line between Vienna and Wolfsthal have been retrofitted with bird protection markings during the summer of 2019. The next steps are adding the protection caps on overhead line masts to keep birds safe, especially species such as eagles, owls, sea eagles, imperial eagles or red and black kites. The S7 is 32 km long and there has been a gradual upgrade of insulation caps.
“So far there is little experience with bird protection measures of this kind across Europe. The experience gained will be exchanged with the other Danube countries as part of this project,” explains Thomas Schuh, project manager at ÖBB-Infrastruktur AG

“The measures implemented together with the ÖBB are an important contribution to the preservation of this biodiversity,” explains Director of the Donau-Auen National Park Edith Klauser, initiator of the LIFE Danube Free Sky project. This EU project on the Danube sets an example of transnational co-operation along migration corridors, resting places and wintering areas for many bird species in Europe. The project is set to finish in 2026, with fifteen partners from seven countries who are working closely together to develop and implement protective measures for birds on power lines.

For more information on the Transnational project.