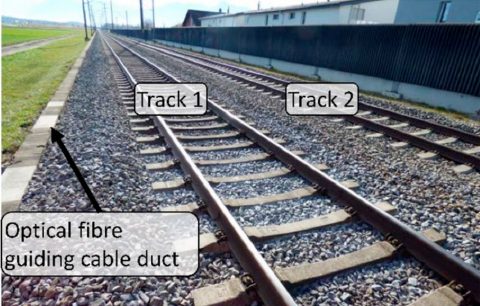 Using measurement methods via fibre optic cables alongside railway tracks delivers more and more up-to-date, data on the condition of railway infrastructure. This allows infrastructure managers to monitor the infrastructure in real-time and so react to defects immediately. It follows from the research led by Ivan Vidovic and Stefan Marschnig from the Graz University of Technology.

The researchers looked into the technique of Distributed Acoustic Senses/Distributed Vibrational Senses (DAS/DVS), which involves the detection of sounds and vibrations via optical fibres. Until now, fibre optic cable networks alongside railway tracks have primarily been used for telecommunication purposes and signalling. The Austrian university investigated how these networks can also be used to monitor the condition of trains and rail infrastructure.

Currently, the condition of railway infrastructure is primarily assessed by track recording cars, wayside equipment, onboard monitoring techniques and visual inspections. According to the researchers, while these analyses provide valuable information on infrastructure for infrastructure managers, the downside is that they are only conducted at particular time intervals. Conversely, optical fibre networks can provide continuous measurements and thus deliver more data.

The research was carried out using an existing fibre optic cable network alongside the Muensingen-Thun-Spiez route in Switzerland. For the most part, this route comprises two tracks. Some parts of the route are used heavily, with an average of nine trains an hour. In the morning rush hour, some trains even run less than two minutes apart, which means there is no time for operational disruptions. Consequently, asserted Vidovic and Marschnig, it was not possible to lay new optical fibres, so the existing infrastructure was used.

For the study, two DAS-based systems were installed in the telecommunication room in Muensingen, Switzerland, from where the route is monitored. The total length of the optical fibre network between Bern (north of Muensingen) and Spiez is 41.640 kilometres, while the track length from Bern to Spiez is 39.080 kilometres.

According to the researchers, the 2.560 kilometre difference arises because of the cable routing and track layout. First, optical fibres are not always routed parallel to the track or do not necessarily cross it. For instance, they may enter buildings at railway stations before returning to run parallel to the track. Second, the optical fibre cables are wound at specific intervals, so that there is additional cable available in the event of a defect.

The detection technique DAS/DVS, which comprises acoustic and vibration detection, transforms an optical fibre into thousands of ‘virtual microphones’, explain Vidovic and Marschnig. The method can be deployed over long distances and delivers real-time information about the condition of the various elements of the track. The analysis, conclude the researchers, confirms the ability of the detection system to monitor the condition of the track and to identify isolated track defects.