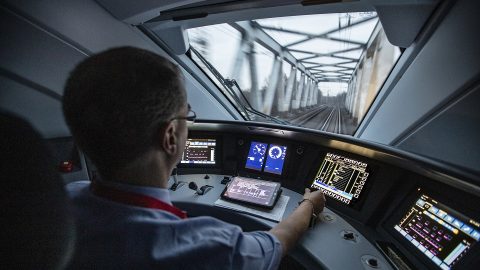 Signalling and ERTMS: what is inside?

The second course of the RailTech Academy was dedicated to a very important topic for the rail industry such as signalling and ERTMS. Jean Rousseau, the railway engineer at IKOS Consulting, has provided detailed explanations to both issues including their origins, purposes, components, features and prospects.

ERTMS (the European Railway Traffic Management System) is a very complicated but important topic for the European rail sector. Professionals have been talking about it since the 1990s. Some countries are being periodically reported about their success in implementing this innovative solution but the ERTMS deployment is still far from its completion.

Nevertheless, European railways need the new traffic management system and its future is impossible without it. Why? As a lecturer of the RailTech Academy, Jean Rousseau answered this question by taking a step back into the history of railway signalling and the ERTMS as well as explaining their features and components.

He started the presentation by defining the main risks that railways face in their everyday operations. According to the engineer, these risks could be classified into six categories:

The mentioned groups of risks have different causes. For instance, derailments often happen as a result of overspeed or broken rails while crashes at level crossings are usually caused by unsafe car driving. In spite of these dissimilarities, all the railway accidents lead to similar consequences: broken rolling stock, traffic disruptions, human injuries and even fatal cases.

To prevent railway risks, various signalling solutions including the ERTMS have been created. However, it wasn’t always like that. Back at the dawn of railways, the industry did not have such problems. “In the 19th century, the trains were not so fast, their speed was very low. The trains were not so huge, and there was no problem to stop a train,” Jean Rousseau explained. The situation began to change with increasing the speed and weight of trains. As a result, railway signalling appeared. The initial solution was to split a railway line into blocks. Therefore, it is called a block system. Jean Rousseau defined several types of block systems – from those with a timetable to automatic ones.

No consistency in signalling

The further development of signalling in the European countries proceeded separately. Consequently, there are many national signalling systems across Europe. Jean Rousseau showed the map that illustrates this signalling patchwork (see the map above). This situation creates additional obstacles for railway operators because there is no consistency between the different signalling systems.

“The good example we are usually giving is about Thalys. It connects four countries: France, Belgium, Germany, the Netherlands. In those countries, there are seven different signalling systems (VM, KVB, ATB, TBL, TBL2, INDUSI, LZB). You need to have a special interface for each system. Of course, it is very complicated. That’s why we need standardisation,” the lecturer said. And the ERTMS has become such standard for the European railways to enhance cross-border interoperability.

The further part of the course was dedicated to the ERTMS equipment. As a simple definition to the new signalling standard, the following formula is used: ERTMS = ETCS + GSM-R. The former element provides the train control as such while the latter element is responsible for mobile communication during the train operations. However, it is a very simplified point of view on the ERTMS. If you look closer (see the picture above), the solution is very complex and contains many technical devices. Jean Rousseau determined three types of equipment applied in the ERTMS:

The GSM-R plays a key role in transmitting the messages and positioning data from a train running through the track balises to RBC. Therefore, the next course of the RailTech Academy will be devoted to this topic. On 22 April Eildert van Dijken, Principal Consultant at Strict, will share his knowledge about the GSM-R.

Would you like to attend the online courses of the RailTech Academy? Please, register on the following link.

If you want to share your knowledge with other professionals, you are welcomed to become a trainer. To this end, you can fill a special form.

2 comments op “Signalling and ERTMS: what is inside?”

I think there is a mistake in the post. DMI is the interface between the human and the train. It interprets data that comes from the train into a language understandable by humans. I think Driver Man Interface doesn’t make any sense, it should be Drive Machine Interface.

Hi Mathieu, good point. But when zooming into details: it’s also not the interface between human and train, but the (operational) interface between driver and ETCS. The train is the object that is operated directly by the driver, with the help & safety of ETCS.

Ofcourse you can see ERTMS/ETCS as a fully integrated subsystem within the train, but actually this is not a common approach in ERTMS, because in chapter ‘Basic System Description’ of the SRS, the object ‘train’ is simply the bare train.