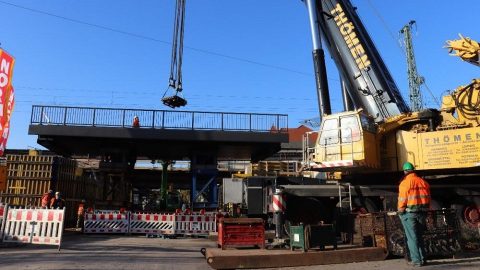 Deutsche Bahn (DB) has modernised 900 railway bridges since 2015. To this end, the company invested 3 billion euros. In the coming years, DB plans to upgrade 2,000 other bridges.

The German railway company will allocate 86 billion euros for the infrastructure projects in the next 10 years. Inter alia, this money will be spent on the modernisation of 2,000 railway bridges. “With the follow-up agreement, around 86 billion euros will be available for the rail infrastructure in the next ten years – a record sum and the right signal for the urgently needed modal shift in Germany. The strong track is the solution,” said Ronald Pofalla, DB Board Member for Infrastructure.

In 2015 DB started a massive programme focused on modernisation of railway bridges. By the end of 2019, it intended to upgrade 875 facilities. However, this plan has been overfulfiled. At the end of December 2019, the German company modernised 900 bridges. The 900th facility was renewed close to Zepernick railway station in Panketal municipality on the northeastern outskirts of Berlin. The two-track bridge consists of two superstructures, it has a total area of ​​210 square meters and is located on the Berlin Gesundbrunnen – Eberswalde – Stralsund route. 170 trains run daily via the bridge. This project costs 30 million euros. It is worth to note that there are over 25,000 railway bridges on the Deutsche Bahn network.

The modernization of the rail network for which the German government has allocated 85 billion euros is intended on the one hand for updating overdue maintenance, but is also being invested in the digitization of the German rail infrastructure. The plans must prepare the German track for the expected and hoped modal shift from the road to the rails. RailTech.com is organizing an event in Frankfurt from 16 to 18 June that is entirely dedicated to this operation; the RailTech Infra Forum 2020. Check the event website for more information.