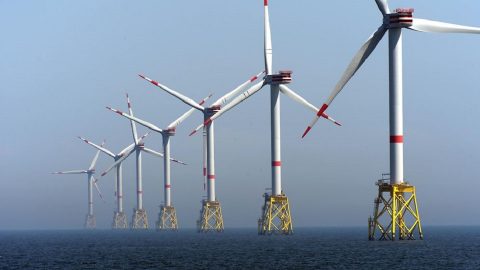 Deutsche Bahn (DB) plans to use offshore wind energy to power its trains. 25 megawatts of green electricity will be supplied from the Nordsee Ost offshore wind farm in the North Sea.

DB Energie, a DB’s subsidiary responsible for power supply of the railway network, will receive the offshore wind energy during the five-year period starting from 2024. It will be produced at the Nordsee Ost offshore wind farm with a total power of 295 megawatts. The wind farm consists of 48 turbines and is owned by Innogy SE, a German energy company focused on renewable sources. RWE Supply & Trading, a German energy trader, will supply the offshore wind energy to DB Energie. The relevant contract was signed between three parties on 9 September. It is the first offshore wind corporate Power Purchase Agreement in Germany.

The new contract is a part of the DB’s corporate strategy ‘Starke Schiene’ (Strong Rail) aimed at energy saving policy and renewable sources. Currently, the railway operator is the largest consumer of green energy in Germany. It consumes over 57 per cent of the energy produced from renewable sources, mostly from hydropower stations. By 2038, Deutsche Bahn intends to switch completely to the green power. “Over the next few years, we will consistently replace expiring contracts based on fossil-fuel generation with renewable energy,” said Torsten Schein, CEO of DB Energie.

DB Energie is based in Frankfurt and has a staff of around 1,700 employees. The company supplies electricity for 20,000 trains every day via a 7,900-kilometre and 110-kilovolt high-voltage grid. Also, DB Energie provides electrical power for around 5,400 train station networks and both for the Berlin and Hamburg city train networks. Its rail power network is supplied by over 50 power and inverter stations from all over Germany. DB Energie is the fifth-largest energy provider in the country with a turnover of 2.8 billion Euros and a sales volume of 25 terawatt-hours.