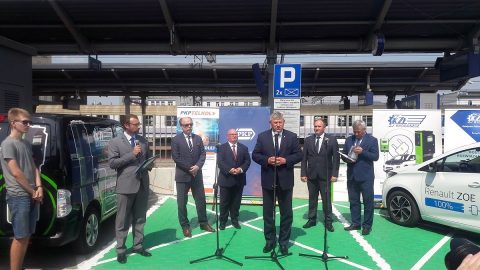 Polish state-owned railway holding PKP S.A. is extending the network of the electric vehicle charging points located at the country’s train stations. The new site has been installed at Bydgoszcz Główna railway station. Two other points will be opened at the railway stations of Gdańsk Wrzeszcz and Gdynia Główna in the coming months.

The new EV charging point was launched at the end of July. It has two sockets with a power of 22 kilowatts per each. The charging site was installed by PKP S.A. in a partnership with PKP Telkol, its telecommunication subsidiary, Kolejowe Zakłady Łączności (KZŁ Bydgoszcz), the Polish manufacturer of the EV chargers, and ecoMOTO, the Polish operator of the EV charging network. “By installing this type of equipment, we are expanding the range of services available at our train stations,” said Mirosław Antonowicz, a Board Member of PKP S.A. The new facility will free of charge until the end of October.

The installation of the EV charging points at train stations is being provided within the Government’s Electromobility Development Programme. The Bydgoszcz Główna railway station has become the eighth one in Poland equipped with an EV charger. The first charging point was installed in November 2018 at the railway stations of Katowice, Katowice Ligocie, Częstochowa and Gliwice. Three more locations appeared in July at the stations of Wrocław Główny, Opole Główne and Warszawa Wschodnia (Warsaw East).