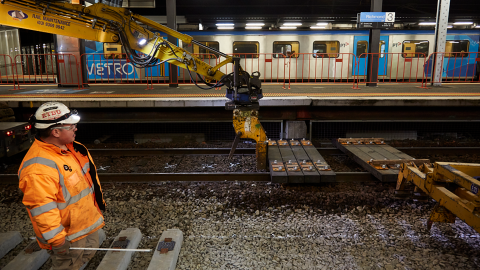 190 sleepers made from recycled plastic were installed for testing at Richmond railway station in Melbourne. It is the first time that the innovative sleepers have been used on the metropolitan train network in Australia. If the trials succeed, the recycled plastic sleepers will be installed across the Melbourne rail system.

Earlier, the innovative sleepers were placed only on the tourist and heritage railways in the state of Victoria including Puffing Billy, Walhalla and Castlemaine. They were installed at Richmond station as a part of maintenance work provided by Metro Trains, an operator of the Melbourne railway network.

The new type of track infrastructure has a longer lifespan than wooden sleepers (10-30 years depending on the kind of wood) and the same lifetime as the concrete sleepers (up to 50 years) but require less energy and resources to manufacture. At the end of their lifespan, the sleepers will be recycled into new sleepers.

The recycled sleepers were produced by Integrated Recycling, an Australian company specialised on manufacturing composite recycled plastics. It is based in the city of Mildura, north-west Victoria. The sleepers installed at Richmond train station were made from recycled plastic sourced in Australia, including vineyard covers and cotton bale wraps as well as a pipe from the mining industry. They are comprised of 85 per cent recycled plastic waste. Every kilometre of track installed with the plastic sleepers requires 64 tonnes of plastic waste to be recycled.