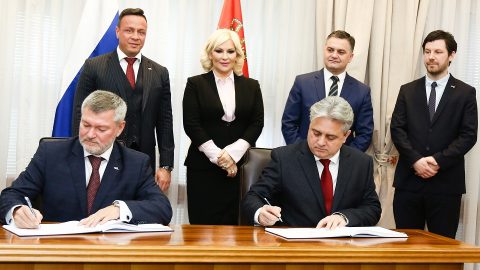 Russia and Serbia have signed two new railway deals. The first concerns construction works by RZD International, a subsidiary of Russian Railways, on the Stara Pazova – Novi Sad line. The second paper is a memorandum concerning the future participation of the Russian company in the maintenance of the Serbian railway infrastructure.

The first deal worth 230 million Euros was signed by the chairman of RZD International Sergey Pavlov and the CEO of Serbian Railways Infrastructure company Miroljub Jevtić on 17 January. It includes construction of the two-track line between Stara Pazova and Novi Sad allowing a speed of 200 kilometres per hour (the single-track line has limited maximum speed). The section is vital for the Budapest – Belgrade high-speed railway. RZD International should also install all the related infrastructure objects, especially power facilities.

The agreement also provides drafting the modernisation of the 210-kilometre section of the Belgrade – Bar railway between Valjevo station and the Montenegrin border as well as the construction of the Integrated Traffic Control Centre. “We will start new projects – construction of a new dispatch centre to manage traffic across Serbia, including the Belgrade-Budapest high-speed railway.

“Also, we are launching the development of the reconstruction project for the remaining 210 kilometres of the Bar railway that will begin in 2020”, noted Zorana Mihajlović, the Deputy Prime Minister of Serbia and the Minister of Construction, Transport and Infrastructure. The construction of a dispatch centre will take around three years.

On the same day the agreement was signed, the parties also concluded a memorandum for maintenance of the railway infrastructure. The document was signed by CEO of Russian Railways Oleg Belozyorov and Zorana Mihajlović. The memorandum provides a strategic partnership between Russia and Serbia in this field. It means that RZD International will take part in the maintenance of infrastructure objects on the Serbian railway network.

“As we use the knowledge of Russian Railways in the construction and modernisation of railways, and as we will use it to build a new dispatch centre and improve the railway traffic management than it is equally important to use this knowledge in the maintenance”, summed up Zorana Mihajlović without noting the details.

The subsidiary of Russian Railways has been participating in Serbian railway projects since March 2014. The company has already reconstructed the Belgrade – Pancevo and the Resnik – Valjevo railway lines. Also, RZD International delivered to Serbia 27 two-car diesel trainsets produced by another Russian company Metrovagonmash. The units were based on the RA-2 diesel railbus. In Serbia, they were named as ŽS 711 series.