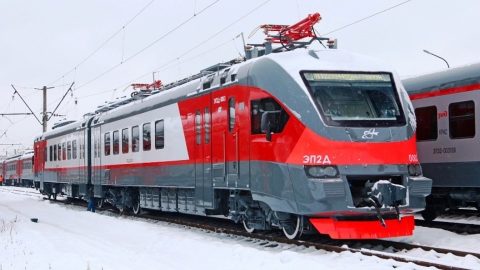 Russian technology group Transmashholding has dispatched a new EP2D electric train to South Caucasus Railway, a subsidiary of Russian Railways responsible for passenger operations in Armenia. It is the second unit of this type delivered to the Caucasus country. The first EP2D train has been running in Armenia since March 2018.

Transmashholding delivered the two-car EP2D electric train to Armenia end 2018. South Caucasus Railway is expected to use the unit for regular passenger operations this year. “It is a unique train manufactured specially for the needs of Armenia”, chairman of the operator Sergey Valko said. In fact, the Russian manufacturer produces the two-car sets only for Armenia. Valko specified that the train is running between the country’s largest cities Yerevan and Gyumri.

The EP2D trains have been developed by Demikhovo Engineering Works (DMZ), subsidiary of Transmashholding, since the mid-2015. The first unit was unveiled in December 2015. This type was designed to operate only on electrified networks powered with 3000-volt direct current.

DMZ has already manufactured 59 EP2D units in different compositions. The two-car sets are dedicated to Armenia while the eleven-car units serve the routes of Central Suburban Passenger Company (CSPC) in Moscow region. The EP2D trains together with EP3D sets, developed for the networks powered with the 25-kilovolt alternating current,are expected to replace the old ER2 units, produced in the Soviet period.