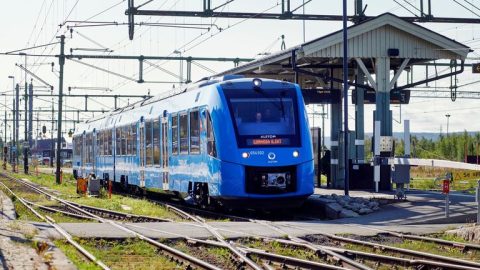 Alstom achieved a new world distance record with its Coradia iLint hydrogen train on Thursday, covering a total distance of 1,175 kilometres on a single filling. The attempt took place in the German state of Lower Saxony.

Presented in 2016, the Coradia iLint hydrogen train was the first of its kind, and has covered more than 200.000 kilometres between 2018 and 2022 as part of various trial runs and regular services. The train has been on the tracks in the Netherlands, France, Poland, Sweden, Germany in and Austria. In the latter two countries, the Coradia iLint has already performed regular services in 2018 and 2020, respectively.

It all led up the to world premier in august of the first 100-percent hydrogen-operated route in northern town of Bremervörde, Lower Saxony, where the record attempt got underway. The journey finished in Munich, in the very south of the country.

The Coradia iLint has a claimed range of around 1,000 kilometres, but Alstom was looking to perhaps push beyond that. “We aim to go as far as no one before with a single hydrogen tank filling”, the company said earlier on Thursday.

The developments in sustainable rolling stock and the associated infrastructure such as recharging and refuelling, are the central theme of the Rail Infra Forum on 12 and 13 October in Berlin. From alternative fuels and batteries in passenger rail to on-track machines, and from recharging batteries under catenary to hydrogen refuelling. The programme and speakers can be found on the event website.