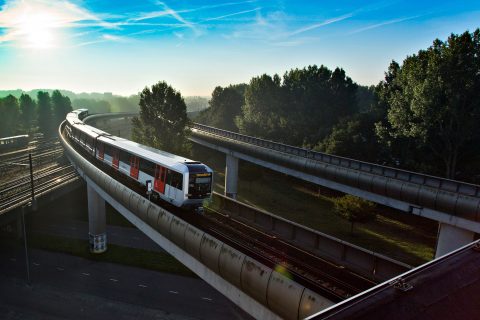 The persistent metro disturbances since the introduction of the new CBTC safety system do not seem to be solved for the time being. The older metro trains from the 1990s are not actually suitable for running under the new system, although they have been converted for it. The result is forced braking, delays and unsafe situations, according to conversations between local TV channel AT5 and the staff of GVB involved.

In 2021, the entire metro traffic was shut down eleven times, often for up to an hour. The same happened in the new year: a one-and-a-half-hour disruption. According to the metro driver of operator GVB, who prefers to remain anonymous, it is a painful consequence of the hasty implementation of the new safety system. He has been working for the transport company for decades and, as a driver, also helped with the test phase of Communications-Based Train Control (CBTC) four years ago.

System does not work with older metro trains

According to him, none of the engineers, including those from supplier Alstom, were satisfied with how the system functioned with the older metro trains. “I had to try to brake at full speed, but that went wrong. The older metro trains are too worn out to function with the precision of the CBTC system. If they roll even a few centimetres too far, the system stops.”

Councilman Egbert de Vries already wrote in a letter to the Amsterdam City Council at the end of last year that he expected the problems with the new CBTC system to last for years. In the letter, he explained the persistent disruptions to metro traffic.

In September, Gerard Scheffrahn, programme director of the municipality of Amsterdam, told Dutch sister title SpoorPro that the train control system had not been designed for the Amsterdam situation and that it was therefore suffering from teething troubles. According to him, there are fewer problems with the North/South line because it is a new railway line.