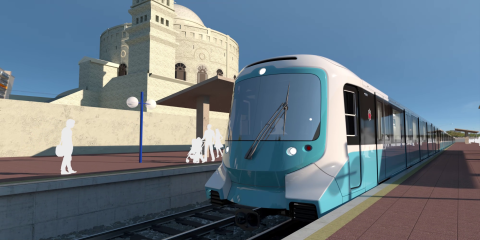 Alstom has been awarded an 876 million euro contract for the upgrade of the Cairo Metro Line 1 by the National Authority for Tunnels (NAT) . The contract consists of 55 Metropolis trains and an 8 year-maintenance contract, and is financed by the French Government.

The agreement was signed last Monday 08 November during the fourth edition of Smart Transport, Logistics and Traffic Fair and Forum for the MEA region (TransMEA 2021) that started on Sunday. This contract is one of several cooperation agreements between France and Egypt for the financing of several development projects in Egypt worth 4 billion euros . This was announced last June by the French Minister of Economy, Bruno Le Maire.

This contract consists of 55 Metropolis trains and an 8-year-maintenance contract. Metropolis train is a 9-car train, a total of 495 cars that will be designed and manufactured in Valenciennes Petite-Forêt, a commune in the Nord department in northern France. In addition, other sites of Alstom in the same country will contribute for their delivery: Le Creusot for the bogies and motor integration, Villeurbanne for the passenger information systems, and Toulouse for electrical engineering.

The Metropolis trains will perform using digital solutions that will allow real-time passenger information, dynamic route maps, video displays and video surveillance. It incorporate Alstom’s solution called HealthHub TM for condition-based and predictive maintenance. The latter, according to Alstom, optimises the lifecycle costs and saves up to 20 per cent in preventive maintenance labour and 15 per cent in materials consumption through data collection.

Metro upgrade for largest city in the Middle East

Cairo Metro Line 1 is the oldest line in the country and even in Africa and Arabian countries, in service since 1987. This line was created in three phases for a total length of 44,3 kilometres, carrying more than 2.5 billion passengers per day. It has 35 stations connecting El Marg metro station to Helwan.