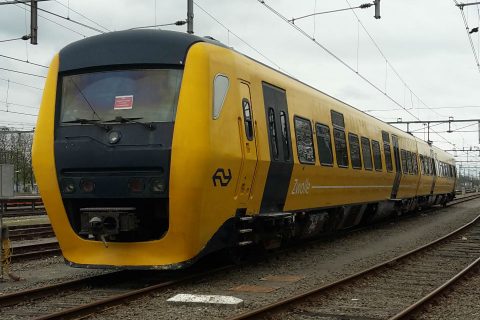 The Romanian rail operator Ferotrans, who took over 48 DM’90 diesel trains from Dutch Railways NS four years ago but never picked them up, now accuses NS and the current buyer of the trains of illegal practices. The Polish SKPL is said to have transported four of the trains to Poland via Germany without a permit. Nonsense, says SKPL. Ferotrans, involved in a legal battle with NS, seems to be making a last attempt to get hold of the trains with these accusations.

Of the 32 DM’90 trains that NS sold to the Polish carrier SKPL at the end of 2020, only four have been transported to Poland so far. According to Ferotrans, who was originally going to take over the trains, SKPL faces the same problems in transporting the trains through Germany as the Romanian company at the time. Ferotrans got stuck applying for a license with the German railway authority and now claims that the first four trains were illegally transported through Germany by SKPL. This is because the Polish carrier did not have a license from the German Railway Authority for this exceptional transport, they say.

The other 28 trains are still waiting for transport in the Netherlands. Ferotrans speaks of a “heavily secured military site in Amersfoort”, where the trains would be out of sight of the public. NS says in a response that the trains have been sold to SKPL and that the new owner is responsible for storage and transport. “As a selling party, we naturally lend our cooperation where necessary. But it is now up to the Polish buyer to park the trains and bring them to Poland”, said spokesman Erik Kroeze.

There are no problems with the transport, according to SKPL spokesperson Albert Mikolajczyk. “The first batch of four trains arrived in Poland on schedule with all necessary permits, approvals and calculations obtained prior to transport.”

After the first transport, SKPL and the engaged carrier decided to change the route in Germany. According to Mikolajczyk, through different border crossings to facilitate the takeover of the trains. Secondly, to be able to use additional coupling wagons on each side of the train to improve the safety of the transport. “Both decisions related to updates of necessary permits, approvals and changes to the freight forwarding agreement. Most of these processes have already been completed and some are still being processed, but this is slower than usual due to the Covid-19 pandemic.”

According to SKPL, part of the agreement with NS was to remove the remaining 28 DM’90 trains from the site where NS had stored them. The choice of areas accessible by rail with sufficient space for 28 trains is limited in the Netherlands. The trains are therefore not secretly hidden away on a military site in Amersfoort, but simply because it was available.

Meanwhile, Ferotrans continues to claim that the story that they were not willing to pick up the trains is incorrect. According to the company, the formalities that allow transport through Germany took years and therefore they could not travel through Germany with the trains. SKPL would now face the same problems, but did manage to get through at least four trains through Germany. “In an illegal way”, says Ferotrans.

“It is difficult to understand that NS is doing business with a company that takes international transport regulations quite lightly to the extent that it has transported four DM’90 trains through Germany without the required license from the German Railway Authority. This illegal transport could have caused a major accident, as the DM’90 has  protruding steps. In Ferotrans’ calculations it was one of the obligations of the German Railway Authority that these steps had to be removed so as not to touch the platforms.”

For NS, the long wait for action from Ferotrans was a reason at the time to terminate the purchase through the courts. The trains had to leave Nijmegen where they were parked in 2019. After that, Ferotrans had the trains seized, which was subsequently lifted by a judge so that NS could sell the trains to SKPL. Ferotrans still claims to own all 48 DM’90 trains because it paid for the decommissioned NS rolling stock. The company says it now has all the necessary paperwork for the transport in order and therefore can transport the trains to Romania in the short term.