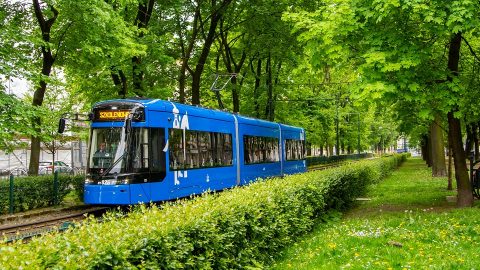 After testing the autonomous tram, the Polish city of Kraków has introduced another innovation on its public transport network. It is the Stadler Tango tram that is able to run by powering from the overhead wires and the onboard batteries. The innovative vehicle is serving one of the city routes on a regular basis.

On Thursday, 18 June, MPK Kraków, the public transport operator in the second-largest Polish city, has officially introduced a new type of low-floor trams on its network. Two Tango light rail vehicles, which were developed and assembled by Stadler, started its regular operations on the city network. Two other trams of this type are being prepared to be entered service. The third vehicle will begin to carry passengers later this week while the fourth unit will be introduced on the Kraków routes in the coming weeks.

One of the Tango trams, which has a serial number of RY825, is equipped with batteries and, therefore, it is able to run without wires at a distance of around 3 kilometres. During the official ceremony, it performed a catenary-free journey on the balloon loop at the Czerwone Maki station in the southwestern part of the city. This vehicle is running on Line 52 that connects the Piastów neighbourhood with the Czerwone Maki station. The second vehicle with a serial number of RY826 has no batteries but it has special areas for installing them in the future. This tram is serving Line 3 between Nowy Bieżanów and Krowodrza Górka.

The new type of trams was nicknamed as Lajkonik, the unofficial symbol of Kraków that represents a bearded man with a hobby horse. All the new low-floor vehicles have a length of 33.4 metres and a width of 2.4 metres. Each tram is able to carry 225 passengers, including 82 seated. The trams are equipped with air-conditioning, video surveillance, interior LED lighting and a modern passenger information system. They also have the recuperation system for using the braking energy.

MPK Kraków concluded two orders with Stadler for the Tango trams. According to the first deal, 50 vehicles should be delivered by the year’s end. Two trams of the first order will be equipped with batter, the remaining ones will have only special places for deploying them later. The second deal includes 60 trams. Of these, the public transport company initially booked 10 units. Afterwards, the firm order was increased up to 35 units. The other 25 vehicles are still an option that could be exercised in the coming years. 35 trams from the second order are scheduled for the delivery in 2022-2023. All the vehicles will be manufactured at Stadler’s facilities in Poland, in Środa Wielkopolska and Siedlce.