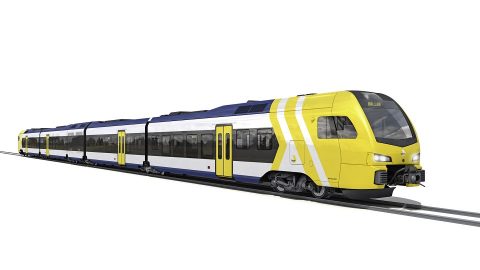 Swiss manufacturer Stadler Rail has concluded a new deal to deliver the Flirt trains to the state of Texas. The company will supply eight diesel vehicles of this type for the Dallas Area Rapid Transit (DART). The contract is valued at 110 million US Dollars (around 98 million Euros).

The Flirt trains will be entered into service by the end of 2022 on the Cotton Belt Line, a commuter rail between Dallas/Fort Worth International Airport and the city of Plano. The four-car vehicles will be able to carry 465 passengers, 240 of them will travel on seats. The deal includes the design of the Equipment Maintenance Facility (EMF) for the future line.

The planned Cotton Belt Line will be operated by the Dallas Area Rapid Transit (DART), a transport authority in the Dallas-Fort Worth metropolitan area of Texas. The route is scheduled to be launched at the end of December 2022. DART will become the second user of the Flirt trains in Texas. Today, eight Flirt diesel units are operated by Trinity Metro agency on the TEXRail route between Dallas/Fort Worth International Airport and Fort Worth downtown. The Flirt trains are also scheduled for the delivery to California (Arrow Line).

Moreover, Stadler has supplied 17 GTW trains for the Texas rail lines. This type is used on the Capital MetroRail Line in Austin, the state capital, and on the A-train route in Denton County, also a part of Dallas-Fort Worth metropolitan area. The GTW vehicles run the commuter routes in New Jersey (River Line) and California (eBART Line).