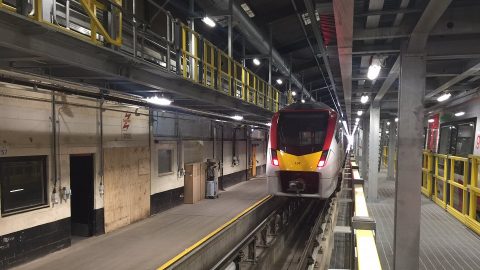 The longish train was delivered from Switzerland to the Crown Point depot in Norwich, the company’s major maintenance facility. The vehicle will be tested during the next months and will be entered into service in late April. The delivered Class 745 train will run on the Stansted Express route connecting London Stansted Airport with Liverpool Street station, a terminus in the City of London.

“Our first long 12-carriage electric train from Switzerland has arrived in the UK today! It’s being hauled to Norwich Crown Point to begin testing & will go into service on our Stansted Express route later this year,” Greater Anglia reported.

At the beginning of October 2016, Abellio East Anglia (later was renamed to Greater Anglia) has signed an agreement with Stadler for supplying 58 electric trains of various composition: 20 12-car, 24 4-car and 14 3-car units. The deal costs 600 million Pounds (more than 700 million Euros). The delivery of all vehicles will be completed in 2019-2020.

Stadler will produce the Class 745 units of two types: 745/0 with a seating capacity for 757 passengers (10 vehicles) and 745/1 for 767 passengers (10 vehicles). The ordered longish units will run on both the Stansted Express route and the London-Norwich Intercity service. The 4-car and 3-car trains will be known under the Class 755 type and will serve the regional lines in East Anglia.

Longish = 12 cars not 10, formed of 6 pairs of coaches each an articulated pairing. Power bogies in the 1,6,7,12 positions. Same traction motors as class 755 giving high power to weight like all FLIRT trains. No diesel gen to cart around either.

Sorry articulation is very confusing. The traction bogies are at positions 1, 8,9 18. You need a diagram.