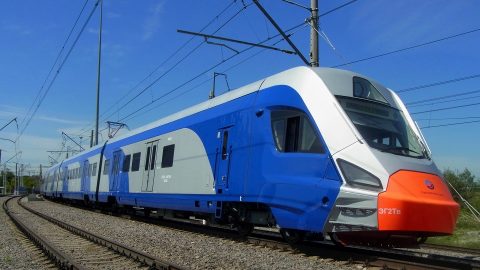 Russian rolling stock supplier Transmashholding has certified longish trainsets of Ivolga electric multiple units that will run in the Moscow metropolitan area. The trains meet the state requirements for operations on the Russian railway network. Transmashholding intends to deliver Ivolga trains in six-car and seven-car compositions instead of the previous five-car sets. The units will be manufactured by Tver Carriage Works (TVZ), a subsidiary of Transmashholding.

“The updated Ivolga trains produced by TVZ have been successfully tested. Transmashholding received a compliance certificate for Ivolga electric multiple units of a longish composition – from five to eleven cars,”, TVZ reported. The approval was issued by government body Register of Certification on the Federal Railway Transport. The certificate allows the manufacturer to produce and supply the Ivolga trains in composition from five to eleven cars. The longish six-car units are expected to enter into service end of 2019 or beginning 2020.

This year, TVZ has signed two agreements with Central Suburban Passenger Company (CSPC), the largest regional passenger carrier in Russia that serves the railway routes in the Moscow metropolitan area. The first deal was concluded in March. It ensured the delivery of 24 six-car Ivolga trains to CSPC by the end of the second quarter of 2019. TVZ has already manufactured two six-car Ivolga units in accordance with this agreement, while three other six-car units are at the final stage of assemblage. The second deal concluded in October, ensuring the delivery of fifteen seven-car Ivolga trains.

Currently, CSPC uses only two Ivolga five-car trains produced in 2014-2015. They run in Moscow and its suburbs serving the routes of CSPC since April 2017. These five-car units have a seating capacity for 222 passengers and a total capacity of 829 people. They are also convenient for passengers with reduced mobility and have four special places for wheelchairs. The Ivolga trains are capable to speed up to 120 kilometres per hour.

CSPC will use the ordered longish Ivolga trainsets on the lines of Moscow Central Diameters. The transport system of upgraded railway routes will facilitate the connection of the city centre with its outskirts and suburbs. The trains are expected to run every 12-15 minutes in the initial stage, with a potential reduction to every 5-6 minutes. The distance between the final stations can become 1.5 to 2 hours. Also, the new system will improve the railway links between the Moscow airports.

The first two routes of Moscow Central Diameters are scheduled for the end of 2019 or the beginning of 2020. They will serve more than 90 million passengers per year. Eventually, the system will have five lines with a total length of 430 kilometres and 214 stations. The annual passenger traffic of Moscow Central Diameters is expected to reach 334 million after launching all six routes.