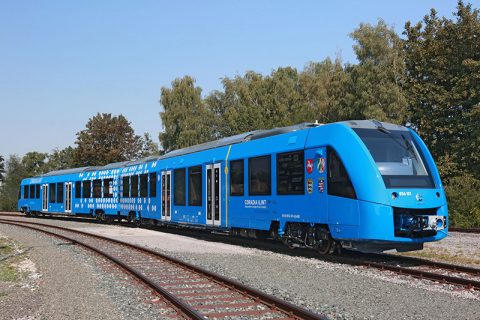 The hydrogen fuel cell CoradiaiLint passenger train from manufacturer Alstom has been approved for commercial operations in Germany. In Berlin, the certificate was officially handed over last week. Germany thus becomes the first country in the world to have a hydrogen fuel cell train for passenger transport on the railway, according to Alstom. The first two prototypes of the Coradia iLint will be deployed this summer in the state of Lower Saxony in North-West Germany. They will replace two diesel locomotives.

The certificate for homologation was granted by the German Railway Office (EBA). The iLint hydrogen-powered train is based on the Coradia Lint diesel train, a regional train. The iLint can cover a distance of one thousand kilometres with the contents of one tank and has a top speed of 140 kilometres per hour. The German government supports the development of the train in the form of a subsidy of more than 8 million euros.

A hydrogen fuel cell train runs on hydrogen. The train only emits steam and condensation. As a result, the hydrogen-powered train is a more environmentally-friendly alternative to diesel trains and cheaper than electrification of the railway. According to Alstom, the CO2 reduction with one Coradia iLint hydrogen train equals four hundred passenger cars on an annual basis (seven hundred tons of CO2). A fleet of fifty trains would equal twenty thousand passenger cars.

Alstom signed a contract in November 2017 to supply fourteen hydrogen fuel cell trains for the German transport authority LNVG in Lower Saxony. Included in the contract are train maintenance and the energy supply for the next thirty years. LNVG buys the iLint trains for its own fleet and then leases them to the carrier Elbe-Weser-Verkehrsbetriebe (EVB). The trains will carry passengers starting in December 2021 between Cuxhaven, Bremerhaven, Bremervörde and Buxtehude in Lower Saxony, replacing the diesel trains that currently run on this line.

“The hydrogen-powered train is a low-emission and efficient alternative to diesel. Especially on secondary lines, where overhead lines are uneconomical or not yet available, these trains are a clean and environmentally-friendly option”, said Enak Ferlemann, the representative of the German federal government for rail transportation. “That is why we support and promote the technology, in order to bring it to the surface.”

Alstom R&D and Innovation vice president Wolfram Schwab said: “This approval is a major milestone for the Coradia iLint and a decisive step towards clean and future-oriented mobility. Alstom is immensely proud of this hydrogen-powered regional train, a breakthrough in emission-free mobility and the fact that it will now go into regular passenger operation.”

Alstom: no problems with delivery of hydrogen-powered train