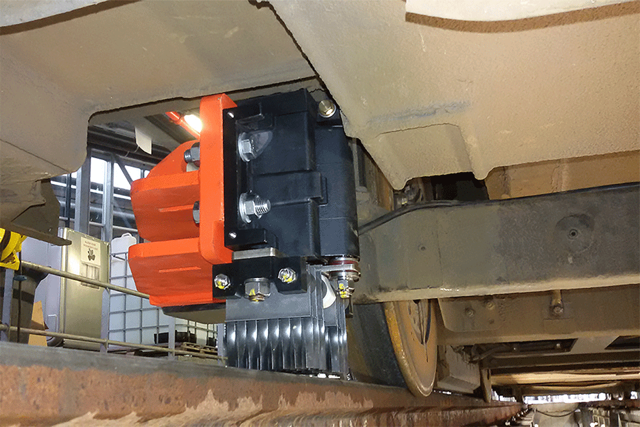 Solutions for contamination of rail tracks by different types of debris

Contamination of train, tram and underground rail tracks by different types of debris such as leaf mulch, snow, ice, sleet, frost, grease, rust, ore etc. has been causing serious problems to the rail industry for decades. Most common symptoms are loss of acceleration and braking efficiency, due to reduced adhesion between rail and wheels (longer distances & more time needed to get from cruising speed to stop/ vice versa), slipping and spinning of wheels (flat spots on wheels), deteriorated/ unreliable track circuits (malfunctioning train detection).

Due to their relatively low operational speed, the solutions currently available for actually cleaning rail tracks are not applicable within regular timetables. Therefore these are mainly used within a very small timeframe, outside operational hours of rail routes. Regrettably, this leaves the rail industry to focus on dealing with symptoms of contaminated rail tracks, rather than removing the debris which is the actual cause of the problems at hand.

The most common example is the use of braking aids, such as braking sand, Sandite, ABS/ traction control etc. Obviously most of these measures are very limited and add contamination to the rail tracks, rather than reducing it.

In some cases, rail operators even consider themselves forced to (temporarily) deploy less trains, in order to reduce the risk of timely and expensive delays and hazardous situations. From a passenger’s point of view (more time necessary to travel and waiting on connections, in combination with less available seats), this might not always seem to be the ideal solution. One could feel that timetables are only adjusted to improve official punctuality statistics, rather to improve customer service.

The global rail industry has been struggling with this tedious phenomenon for decades and sadly it seems that we are still short of an effective solution to deal with it. To some it might seem that the rail industry won’t be able to find suitable means to deal with it successfully. It might even seem that we should just surrender to it. Just accept and absorb the discomfort. Or, …..should we?

Imagine a very simple, low-tech and rigid device that actually cleans the running surface of rail tracks, third rail or catenary. One that in fact removes contamination such as leaf mulch, snow, ice, sleet, frost, grease, rust, ore, etc., by simply scraping over it with a precisely controlled force.

Now try to imagine that same device being applied within ordinary rail timetables, because of operating speeds exceeding 70 km per hour. And what if that very same device could also be activated and de-activated easily by an (automated) control signal, allowing operation (cleaning) at any given part of a route?

And what if, in addition to the points previously mentioned, that device did not need specialised equipment or vehicles to operate it? No exclusive cleaning runs required. Because that device could easily be mounted to (existing) ordinary (low floor) trams, underground train cars, main line passenger and freight train cars, maintenance train cars and rail cleaning vehicles. Allowing each single part of the operator’s fleet to be used as a cleaning vehicle. The operator could simply preserve the required quality of the rail track running surface by using it.

To good to be true? Visit AFT pneumotion at stand number 3.313 during Railtech Europe 2017 exhibition (28th to 30th of March) and get acquainted with the Rail brush. The Rail brush is a rail head conditioning system to clean the running surface of rails, providing all above mentioned features. It is considered to be a welcome innovation to the rail industry and nominated for an innovation award in the category infrastructure. Register for free entry tickets and visit us.