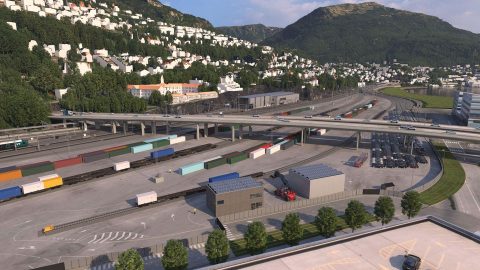 On the same day the TEN-T regulation was revised, the European Commission published the Action Plan to Boost Long-Distance and Cross-Border Passenger Rail. Such a plan is also needed for rail freight, says the UIRR. According to the industry group for combined transport, the similarities between the two are striking, but the focus lies only on passenger traffic.

“The two seemingly conflicting areas of passenger rail and rail freight should be addressed comprehensively, and not in a one-sided manner from the perspective of only one of the two interested sides as suggested in the Action Plan”, said the UIRR.

Passenger traffic is traditionally prioritised in the EU, something to the dismay of the rail freight industry. The challenges faced by the industries are very similar, the UIRR points out after reading the action plan. “The European Road-Rail Combined Transport sector requests that a similar action plan is issued to target long-distance and cross-border rail freight without delay.”

The challenges of intermodal traffic in Europe, according to the UIRR, can be summarised as follows:

One of the solutions the industry body suggests lies in optimal capacity management, that takes into consideration all relevant elements for both passenger and freight traffic.

“Optimal capacity management should be based on the socio-economic cost-benefit analysis method proposed in the recently published Commission proposal on the revision of the TEN-T Regulation. The rail infrastructure is uniquely suited for carrying heavy loads, such as 740m-long 2000t freight trains, which should be better exploited for society, climate, environmental protection and the economy”, pointed out UIRR President Ralf-Charley Schultze.

What is also needed, is a major investment by the sector into rolling stock, the UIRR adds. “This should be equally assisted by funding programmes in the case of cross-border rail freight as proposed for passenger services.