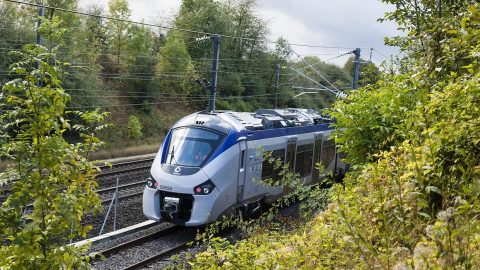 Alstom announced that it has agreed to divest its Coradia Polyvalent platform, its Reichshoffen production site in France and its TALENT3 platform, currently developed in Hennigsdorf, Germany to the Spanish company CAF. This was one of the conditions from the European Commission of the clearance for the Alstom/Bombardier transaction.

In July 2020, the European Commission cleared Alstom’s acquisition of Bombardier, but under four conditions. More than a year later, Alstom did not yet meet the conditions for the acquisition of Bombardier Transportation, and is now taking another step. With the divestment of the three business parts to CAF, Alstom meets one more condition. Alstom now expects to close the transaction with Bombardier between April and September of 2022.

CAF says to be ‘pleased with the transaction, which will enable it to continue its development thanks to the skills and know-how of the concerned sites’. The company continues to invest in France consolidating its position in this country and will boost its activities in the German and central European markets.

The European Commission noted that the Alstom/Bombardier merger, as initially notified, would have raised serious competition concerns in several areas, and therefore set several conditions. For example, for mainline rolling stock the merged entity further strengthens the already large combined position in particular in France and Germany.

Another condition for the merger is that Bombardier’s assets currently contributing to its joint very high-speed platform with Hitachi, the “Zefiro V300” also have to be divested. Alstom also committed to a series of measures aimed at preserving the joint bid offered in consortium by Bombardier and Hitachi to HS2, the current largest opportunity for the production of very high-speed rolling stock in Europe.

There were also some concerns about signalling, where the merged entity would have had the ability and the incentive to make it more difficult for other suppliers of ETCS on-board units (OBU) to interface with its many already installed signalling systems (legacy OBUs) and its already operating fleet of trains, which is the largest in the European Economic Area.

For this, the conditions formulated by the Commission included that Alstom has to supply legacy OBUs and necessary interfacing information and support, in favour of signalling competitors, as well as supply legacy OBUs to the Dutch infrastructure manager, ProRail, in favour of all interested operators. It is unclear whether Alstom has already taken action to meet these other conditions, and the company has not been available for a comment on this.