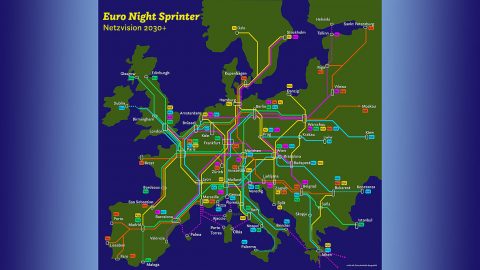 German party Die Grünen has presented a plan for a European-wide night train network. They sharply criticise the German railway policies of the past years and call for expansion of infrastructure, lowering track access charges and having fair competitive conditions between rail and airlines.

The Green party’s vision is a European network with around 40 international lines that connect more than 200 large cities, medium-sized centers and holiday regions across Europe with one another. This should be expanded to 500 eventually.

In short, the plan has the following five points:

“Our five-point plan for strong night train traffic ties in with the EU strategy and relies on good cooperation at European level which should be supported, among other things, by the European Railway Agency ERA”, say the Greens.

The Green Party particularly criticises the downfall of night trains in Germany over the past few decades. “It was completely discontinued by Deutsche Bahn AG in agreement with the owner – i.e. the federal government – in 2016. Allegedly because night trains are not profitable enough. However, other providers such as the Austrian ÖBB have been successfully expanding their night train services for years and are thus pioneers in climate protection in long-distance transport.” ÖBB operates 19 night train lines in Central and Western Europe, and in three years this should be 26.

Instead of getting out of night train traffic and abolishing a sustainable alternative, it was the task of the federal government to finally shape competition between airlines and railway companies fairly, say the Greens. Another critique is the fact that there is no VAT on an international flight tickets so far, while that is the case for train tickets.

Night trains would also benefit from lower track access charges for the night hours when the rail network is less busy anyway. The Federal Ministry of Transport has so far rejected such a measure, although they were lowered due to corona. The German government did present plans for “Trans-Europe-Express 2.0” , but in the eyes of the Greens, that is so far “little more than a small toy train in the dreary shop window of German rail politics”.

The Greens emphasise the central role of Germany, through which many European connections run due to its central location. According to them, the railway network has been cut to pieces for decades and remains below its capabilities. This is mainly due to government policy and lack of priority to rail.

“Contrary to all assurances that it wants to shift more traffic to the railways, the federal government, supported by the Union and the SPD, will provide only 1.5 billion euros for the railways in 2021, but twice as much for new federal highways and motorways”, says the party.

According to the Green Party, the government has delayed the expansion and modernisation of cross-border rail connections for decades. They call it ’embarrassing’ that Germany is not keeping contracts with its neighboring countries and is breaking numerous promises to expand rail lines.

As an example, they mention the expansion of the Rhine Valley Railway, which has been part of the federal transport infrastructure plan since 1980 and was contractually guaranteed to Switzerland in 1996. But while the Swiss side has even completed two long tunnels, Germany is 21 years late and will need until after 2040 to complete its tracks.

Connections to Germany’s eastern neighbors are also being delayed considerably. On the route from Dresden to Breslau, for example, Germany is almost 10 years behind when it comes to electrification. In order to make up for these delays, more funds for the rail network should be done, say the Greens. These are “just as overdue as a structural reform that reorganises the responsibilities for the rail infrastructure”, showing that the Green Party is not a fan of the current structure where the state company Deutsche Bahn runs both the infrastructure and most operations.