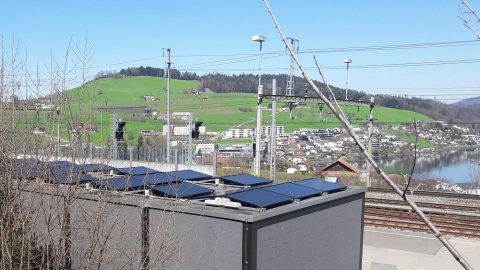 Swiss Federal Railways (SBB) will increase the consumption of solar energy produced at the roofs of its own buildings. To this end, the operator has concluded the first photovoltaic contract with electricity distributor Centralschweizerische Kraftwerke to equip two SBB’s buildings with the solar panels. One of them is ready, another will be finished in Autumn.

The SBB’s first photovoltaic contract includes several win-win options. From one hand, the Swiss national railway company does not see itself as an energy producer and supplier. It transfers this right to Centralschweizerische Kraftwerke (CKW). From another hand, CKW plans, builds, operates the solar systems as well as supplies the electricity to SBB at a price lower than on the market. “Since the majority of the electricity does not have to be fed into the grid, but is used directly on site, the grid usage fees do not apply. This means that SBB can buy electricity more cheaply than if it had to procure it on the free market,” the railway operator stated.

The photovoltaic system on the roof of the Conservation and intervention centre (EIZ) in Erstfeld, the canton of Uri, was put in place in late January 2020. Another location, the Giubiasco frequency converter, will be completed in Autumn of this year. The energy produced at these sites will be used for heating, ventilation, cooling and lighting of the SBB’s buildings.

In 2018 SBB started a programme ‘New Renewable Energies’ devoted to the development of the photovoltaic energy. Its main target is to increase the share of solar household electricity with a frequency of 50 Hertz to 30 gigawatt-hours by 2030. As of today, the Swiss company has been already operating 12 photovoltaic systems installed at its facilities including those in Muttenz, Rotkreuz and Immensee. In the future, SBB will equip all new railway technology buildings with PV systems as standard.

It is worth to add that SBB needs around 275 gigawatt-hours of household energy a year for powering its station buildings, offices, workshops and tunnel systems. At the same time, the national railway operator and 13 private ones consume around 2,400 gigawatt-hours of the traction energy annually with a frequency of 16.7 Hertz. 90 per cent of this energy comes from hydropower. By 2025, SBB intends to use the traction energy produced only from renewable sources.