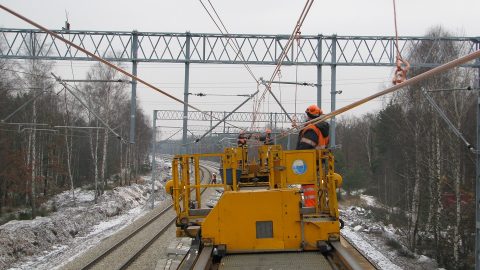 The Polish rail sector intends to reduce the energy consumption by 1.2 terawatt-hours in the next 10 years. Three main steps will be implemented in this regard: the increase in using the braking energy, eco-driving and installation of the photovoltaic solar panels. This month the new project related to the braking energy has started on the lines of the Polish regional railway operator Łódź Agglomeration Railway (ŁKA).

Starting from January, the new accounting and invoice system has been introduced by PKP Energetyka, the energy supplier on the Polish railway network, and ŁKA, the railway operator in the Łódź and Masovian voivodeships. The innovation takes into account the regenerative braking energy. It will be accounted by the energy meters installed on the ŁKA’s trains. Earlier, this type of energy was excluded from the calculations. According to the preliminary estimations, the usage of the braking energy will allow ŁKA to reduce its costs by 20-25 per cent. “By reducing costs, we become more and more competitive. This can be seen in the increasing number of connections and the number of passengers,” said Janusz Malinowski, CEO of ŁKA.

1.2 terawatt-hours of the planned energy volume will result in reducing 1 million tonnes of CO2 emissions by 2030. The same effect would have the planting trees on 83,000 hectares. This is expected to be achieved in three ways. Half of the planned volume of electricity will be provided by the regenerative braking energy. Another half is split by eco-driving (400 gigawatts-hours) and solar energy (200 gigawatts-hours). “The less consumed energy on rails is an important step to increase the competitiveness of our sector. As a distributor and supplier of energy for rail carriers, we try to look for the solutions that can increase the energy efficiency of the operators and reduce the energy consumption,” noted Leszek Holda, PKP Energetyka’s Member of Board.

In March 2019 the Polish railway companies established Centre for energy efficiency of railways (in Polish ‘Centrum Efektywności Energetycznej Kolei’, CEEK). It was established to promote energy-saving projects and to join forces of the various segments of the Polish rail sector. Among the CEEK members are PKP PLK (the national rail infrastructure manager), PKP Energetyka (energy supplier), rail freight operators (PKP Cargo, CTL Logistics, Lotos Kolej), passenger companies (PKP Intercity, ŁKA, Przewozy Regionalne, Koleje Mazowieckie) as well as educational and research institutions (The Railway Research Institute, Warsaw University of Technology). The association organises meetings and workshops for its participants where they change their experience. The latest workshops took place at the end of 2019. They were dedicated to eco-driving and energy measuring.