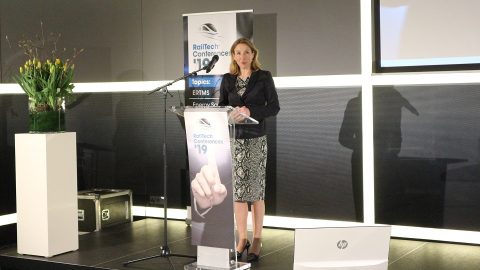 Dutch infrastructure manager ProRail plans to increase the number of solar panels installed at train stations. This could double generated solar energy by 2020. Such plans were announced by Stientje van Veldhoven, State Secretary for Infrastructure and Water Management, at the RailTech Europe 2019 Trade Fair held in Utrecht, the Netherlands.

“We are already generating over one million kilowatt-hours of energy with solar panels at stations. By 2020 that figure will be two million”, she said. By 2030 ProRail wants to become totally energy-neutral and generate the consumed energy by itself. The official noted that all the Dutch railway stations are equipped with LED lighting. She stressed that wind energy is also important for the country’s rail sector. “Wind energy already accounts for more than 18 billion passenger-kilometres a year,” Stientje van Veldhoven remarked.

ProRail is working on other energy-saving projects. In January the infrastructure manager started to construct the first energy-neutral train station in Delft. The project includes the installation of solar panels on building roofs. The project is implemented at Delft Zuid station, which will be totally solar-powered. It is worth 2.4 million Euros.

Currently, the largest volume of solar-powered energy is generated at the Eindhoven railway station. In December 2017, 1,900 solar panels were installed at the station building. The panels are capable of generating 450,000 kilowatt-hours annually. This volume provides 60 per cent of the total energy usually consumed at the Eindhoven station.