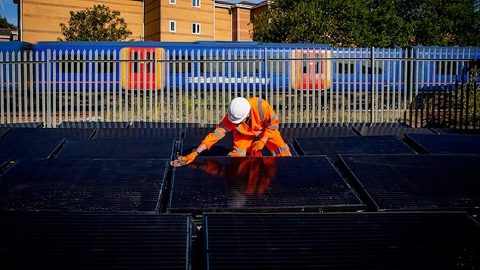 Sun-powered trains closer than you think

Even in rainy Britain, the railway can be solar-powered. It sounds like science fiction, but it is very much fact. A modest solar farm has been installed at Aldershot in the south of England to feed power into the network. However, with an output of 30 kilowatts, a more accurate description might be solar allotment. The generating capacity represents about 1 per cent of the requirement for a heavy freight locomotive. Still, it’s plenty powerful enough for some basic tasks.

The array is a pilot scheme for Riding Sunbeams, a coalition of interests with the big idea of powering the UK railway network with a vast installation of line side solar panels. This beginning though is typically British and understated. It sits behind some standard security fencing in a former siding, and provides power for signalling, switching and ancillary services. It’s been successfully doing that for the whole of the British summer, despite the weather.

It’s not the first and not even the biggest solar project on the railways of Britain. There are better examples of renewable energy production on the network. Most prominently, the roof of Blackfriars Station in London, which spans the River Thames, is shaded by solar panels that provide power for the concourse and offices within.

What makes the Aldershot scheme unique is its directness. The output of the array goes straight to the railway, bypassing the established practice of supplying to the UK’s power distribution network, and then trading the net energy consumed or supplied at a special tariff. Solar power may be the very twenty-first century, but railways generating their own electricity is nothing new. Over a century ago, in 1905, London County Council, the local authority of the day, designed and built its own generating station, in the upmarket suburb of Kensington, which was active into this century.

The sunny United States of America has yet to embrace any significant form of electrification on its trans-continental freight network. It’s diesel all the way, from Alaska to Arizona. Yet, while there are no significant wires in the USA, for continental Europe and Asia it’s a different story. Renewable energy a real option for most operators. Consider those new Silk Road routes, lined with solar panels, effectively powering themselves.

On a smaller scale, Scotland is close to generating all the country’s energy needs from renewable sources. However, the Abellio managed ScotRail isn’t quite ready to be fully sun, and in Scotland – wind, powered. Even though the Scottish government is committed to a fully carbon-free railway by 2035, there are still significant route miles that rely on diesel power. Proposed solutions include hi-tech hydrogen and more conventional battery electric power. Batteries provided the power for local services in the 1960s around Aberdeen – a city where modern wires have yet to reach.

The practicalities of a ‘last mile’ electric locomotive generating its own power are already addressed. The same technology that allows trams to charge a battery on the move, for short hops between overhead wires, is already a reality. The commuters of Birmingham have seen this arrangement under test since August. The science-fiction solution of solar panels on the locomotive roof might provide enough power to keep the headlights on and the cab warm, but moving a few thousand tons of freight is another matter.

Britain’s rail network is also Britain’s biggest single energy consumer. One per cent of all energy is used on the railways. It’s going to take more than an allotment in Aldershot to make it energy self-sufficient, but it’s a move in the right direction. Perhaps the first ray of sunshine in a new, solar-powered railway has already dawned – even in rainy Britain.