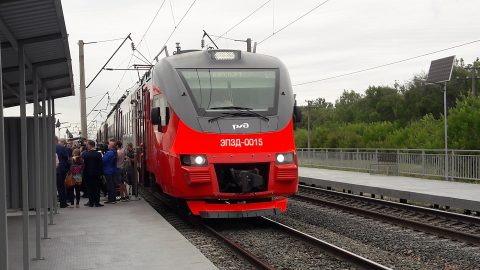 One more airport in Russia gets rail link

The newly-opened Saratov Gagarin Airport has received the rail link with the adjacent city. There are nine trains delivering passengers to and from the airport. In the future, Russian Railways will construct the new railway and train station to be located much closer to the terminal.

The new rail link was launched on 20 August together with the opening of the new airport. Saratov Gagarin Airport has replaced the old Saratov Tsentralny Airport. To serve the route between the city and airport, Saratov suburban passenger company, a joint venture of Russian Railways and Saratov Oblast, purchased three four-car and one six-car EP3D electric multiple units. Three of nine connections are operated as express trains with fewer stops. The single journey from the city of Saratov to Gagarin Airport takes 38 minutes and costs 95 Rubles (1.3 Euros).

The existing railway stop ‘Gagarin Airport’ is a temporary point for passengers. It is located in around 300 metres from the airport terminal. In the next two-three years, Russian Railways plans to build a new passenger station that will be closer to the terminal. Also, the company intends to construct the five-kilometre railway line that will be used only by the trains going to/from Gagarin Airport. This project is estimated at 2.5 billion Rubles (circa 34.4 million Euros) and includes the construction of the railway bridge across the Kurdyum River and the overpass above the highway.

The EP3D electric multiple units are developed by Demikhovo Engineering Works (DMZ), a part of Transmashholding. They are capable to speed up to 120 kilometres per hour. The first vehicle of this type was produced in 2016. To date, DMZ has already manufactured 51 EP3D four-car and six-car trainsets. 47 of them are operated by Russian Railways and its regional subsidiaries while four units run in Kazakhstan. The EP3D trains could be produced in a four-, six-, eight- and nine-car formations.