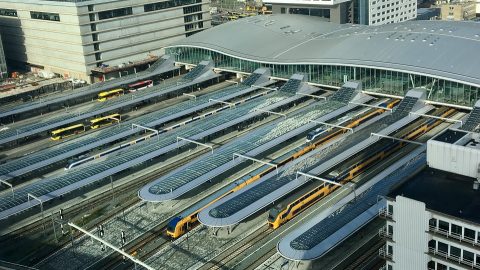 The town and city centres are becoming increasingly popular to live or work in, and that also includes areas around stations. But there is less building space in these areas than elsewhere in a town or city. So what are the options?

Last Thursday, at the Day of the Railway (Dag van de Rail), a panel of experts from NS, ProRail and the Province of Utrecht discussed the stations of the future. Not only do young people with no children want to live in towns and cities, but also increasing families do too. The suburbs are emptying. Moreover, companies are moving from industrial areas next to motorways back into towns and cities. Station districts have therefore become attractive places to live and to work. This means that alongside the crowds in the stations themselves, there are also more people in the immediate surroundings. At the moment, an average of 180,000 passengers use Utrecht Centraal every day. According to predictions, this will become 250,000 passengers per day in just a few years’ time. So where will all the people go to?

The land prices are now so high and the demand for space in towns and cities so great that it is logical to build above the tracks, says Dennis Straat, a former Provincial Council member of the Province of Utrecht. Vincent de Heer, Senior Station Developer at NS Stations, also believes that the time is ripe to build over the tracks. “We already have the land, but a disadvantage is the tracks and overhead cables that are there, which makes building more expensive and more complex.”

De Heer says that another significant disadvantage of building above the tracks is that you subsequently cannot do anything more with the tracks themselves. “Once there are buildings right next to or above the tracks, you can’t add any more tracks or a switch that later turns out to be necessary. From a technical point of view, moveable columns can now be used, but they are expensive. And when it comes to housing, you also have to think about vibrations and noise pollution. After all, freight trains need to keep using the lines.”

For Astrid Bunt, Director of Stations at ProRail, the ideal scenario would be to have stations in towns and cities as urban parks, and feeder stations outside the centres of larger towns and cities. “By doing this you can relieve the large stations, where there are high volumes of traffic and enormous pressures on parking. At the same time, you are keeping it easy to reach the suburbs.” In this regard, Bunt is envious of cities such as Paris and Copenhagen. “There they have feeder stations. These have required a large investment, but they have succeeded in creating seamless public transport networks. This requires courage and speed, which we sometimes lack. We have a fantastic system in the Netherlands, but it takes a long time to get things done.”

According to Straat, Bunt and De Heer, the areas around stations are at least as important as the buildings. In most towns and cities, good solutions have already been developed for buses, trams and metros. And increasingly, the mountains of parked bikes are being moved into underground parking facilities. Utrecht Centraal will soon have the largest covered bike parking facility in the world, with room for 12,500 bikes. But the number of bikes is climbing faster than the number of places to park them. Research from the Netherlands Institute for Transport Policy Analysis (KiM) shows that the popularity of cycling is growing at the expense of trams, buses and metros. This is a luxury problem, says Bunt. “If we were talking about cars instead of bikes, then we would have had a real problem. Having said that, the biggest bike parking facilities are getting full, including with abandoned bikes, so we need to come up with something.”

“Space for pedestrians raises the quality of the areas around stations”, argues Straat. Someone from the audience suggested a park over the tracks, similar to the park that has been built over the ring road in Maastricht, and Straats thinks this is also an attractive idea. But according to De Heer, a park is more difficult to build in a profitable way than property that can then be put on the market. “A park is profitable because of what it is next to. However, it’s technically possibly and what’s nice is that you create land or public space that was never there before.” 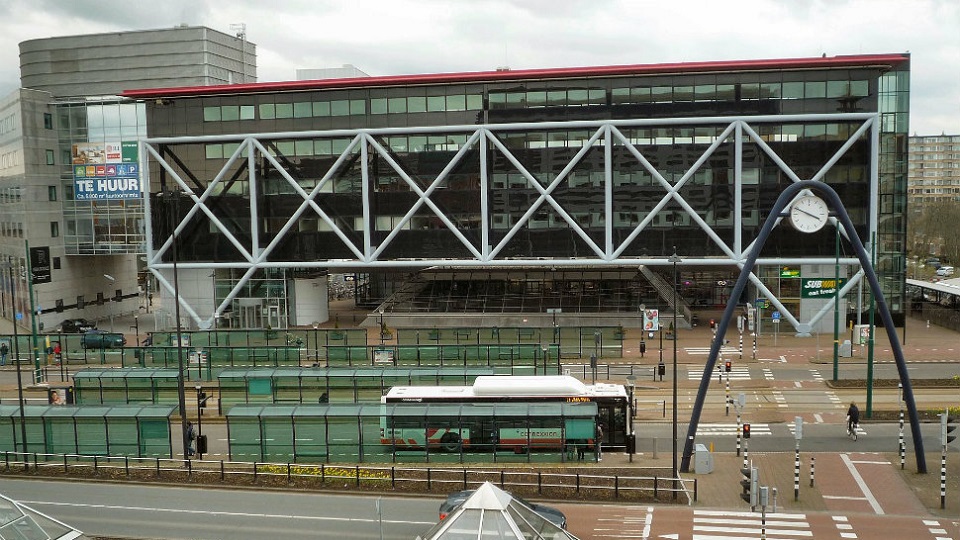 Building next to or over the tracks is of course nothing new. De Heer cites Rijswijk Station, which became the first station in the Netherlands with apartments and offices over the tracks, more than twenty years ago. In hindsight, Rijswijk is not a textbook example of how to successfully build over the tracks. In fact, in 2016 passenger association Rover voted it the ugliest station in the country. How people experience living and working in the area has not been studied.

“Rijswijk Station does indeed have some shortcomings, which we have learned a lot from,” admits De Heer. Former Provincial Council member Straat believes that there is also room for improvement in his province. “In Hilversum and Amersfoort, the offices are so close to the tracks that there is no more space to build around or over them.” All three panel members acknowledge that, until now, it is primarily office blocks that have been built next to the tracks, and that building apartment blocks is more complicated. Part of the reason for this is the unavoidable noise and vibrations caused by freight trains.

Furthermore, the demand for office spaces close to or over the tracks appears greater than the demand for living space there. “In the eighties, businesses all moved from town and city centres to industrial areas by motorways, so they were easy to reach by car, but now they are all coming back”, notes Brunt. “Large businesses want to be closer to stations. It is a way to survive, as it means that can draw in the talent that they need. Young people want to commute to work in a sustainable way, but also attach a lot of value to the location of the workplace itself, and what there is to do in the area. Increasingly, these factors weigh just as heavily or even more heavily than the size of a salary package or a company car.”

Heerhugowaard is an example of a smaller town that is making big steps forward in this regard. As it is a bit too far from Amsterdam to act as a feeder station, Councillor Monique Stam-de Nijs devised another solution to get the town on the radar of NS and ProRail.

“We don’t own enough land around the station to do spectacular things, but outside the centre, there is room for a rail yard, which is really needed. Originally, ProRail had Uitgeest in mind, but they did not want a rail yard there, so we made an offer from Heerhugowaard. That opened doors. A rail yard outside of the town means that more trains will go through our station and so more people will use them. In the coming years, we expect to see the number of passengers getting on at Heerhugowaard each day to grow from eight thousand to ten thousand. The hope is that this will result in it becoming an intercity station.”

Creative with the railway

Instead of making extensive plans for the area around the station, the councillor devoted her time and energy into getting developers interested in new projects there. “A twenty-storey building for living and working is being built, and a number of other plans for upgrading the area are in the offing. I’m also working on a pedestrian tunnel that we really want to build. As the space and budget available are limited, we have to come up with creative solutions.”

One possible solution is to reduce the number of tracks from three back to two, as then the passenger footbridge can be narrower and the tunnel shorter. “ProRail made this proposal, but I want to study it in depth, because if we might need three tracks in the future, it would seem counterintuitive to get rid of one track now.”