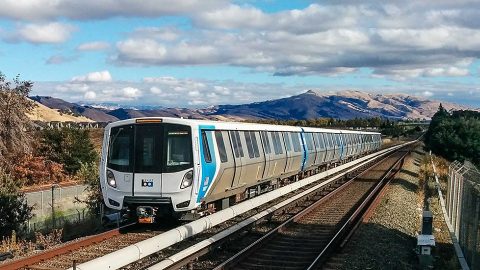 Bombardier to open new railcar assembly site in US

Bombardier Transportation plans to launch a railcar assembly site in Pittsburg, California, in the coming months. The new facility will produce trains for the commuter routes in the San Francisco Bay Area.

Initially, the Pittsburg site will be focused on the assembly of the ‘Fleet of the Future’ railcars for Bay Area Rapid Transit District (BART) that operates the commuter lines in the San Francisco Bay Area. It allows Bombardier Transportation to free up its New York facility which is currently producing this type of rolling stock. Afterwards, the Pittsburg site will be specialised on the West Coast market while the New York site will be focused on the East Coast orders. The new location will also help Bombardier Transportation to meet Buy America requirements.

“The Pittsburg site will also enable Bombardier to pursue additional business opportunities in the growing rail transit equipment market on the West Coast and to serve this market with increased effectiveness. We’d like to thank the Governor’s Office of Business and Economic Development for its support, which includes the award of a California Competes Tax Credit,” said Elliot G. (Lee) Sander, President of Americas Division of Bombardier Transportation.

In 2010 BART announces its plans to upgrade its rolling stock with so-called ‘Fleet of the Future’. In 2012 the agency ordered 410 new train cars from Bombardier Transportation for 896.3 million US Dollars (around 799.7 million Euros). The new order for 365 cars was concluded in 2013. The ‘Fleet of the Future’ cars will allow BART to replace its entire old rolling stock. The new type was introduced on the BART routes in January 2018. Each car has 50 seats and one area for bicycles. Later, they will be modified to have two bike areas. The cars are also compatible with all the standards for passengers with reduced mobility. The ‘Fleet of the Future’ trains are equipped with LED lights and regenerative brakes.

BART network consists of six electrified and third-rail-powered lines as well as one automated route. The system is being operated since 1972. The network is served by trains formed by four to ten cars. Two airports, Sa Francisco and Oakland, are connected with BART service. The five-kilometre automated line provides service to Oakland International Airport, while San Francisco International Airport is linked with the ordinary electrified route. The BART network is also connected with eBART non-electrified branch line that connects the city of Antioch with Pittsburg/Bay Point station.