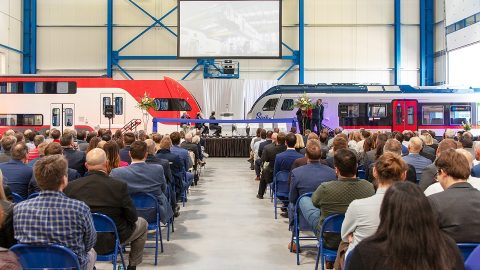 Swiss train producer Stadler Rail has opened its first manufacturing facility in the USA. The plant is located in Salt Lake City, close to the local international airport. The facility will produce the electric, diesel trains and metro units for the US market.

Stadler Rail has officially inaugurated the Salt Lake City facility on 13 May. The production site has been constructed for 18 months. The site has a square of 62 acres and includes several halls of 45,000 square feet each. The current building is 230 thousand square feet in size.

“Today it is a great pleasure to present a car body of the first double-deck train being manufactured for the USA as well as the last Flirt for TEXRail. To a high degree, these trains were built right here in Salt Lake City,” said Peter Spuhler, CEO of Stadler Rail. Also, the Salt Lake City facility will produce the METRO trains for Atlanta.

Stadler Rail has entered the US market at the beginning of the 2000s. In 2002 it concluded the first deal with New Jersey Transit Authority to deliver 20 GTW articulated diesel vehicles for the River Line tram-train service. The GTW units were also ordered by Capital Metro Transportation Authority in 2005 (six units), the Denton County Transportation Authority in 2009 (11 units), San Francisco’s Bay Area Rapid Transit in 2014 (eight units).

In 2015 the Swiss manufacturer received the first US order for the Flirt trains to be operated in Texas. Another milestone was reached in 2016 when the company obtained an order 16 double-deck trains of the Kiss type for the Caltrain commuter service. They will be entered into service in 2020.