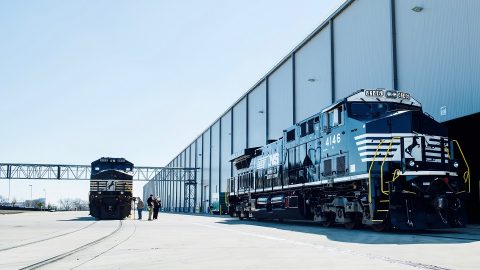 GE Transportation, the General Electric’s subsidiary specialised in manufacturing rolling stock and railway equipment, has merged with Wabtec Corporation. The U.S. technology company has sold more than half of GE Transportation shares. The remaining lesser half is still owned by General Electric directly or via its shareholders. The merger deal will strengthen Wabtec’s railway business.

The completion of the merger deal was announced on 25 February. General Electric (GE) received 2.9 billion Dollars (more than 2.55 billion Euros) in cash for the shares of GE Transportation. At the same time, the technology group remains direct control over 24.9 per cent of shares while the shareholders of General Electric own 24.3 per cent.

“This transaction is good for GE shareholders, who gain equity in an organization at the forefront of rail innovation; for GE, as we work to reduce leverage and strengthen our balance sheet; and for Wabtec, which now has a stronger and more diversified business mix to serve its customers. The GE and Wabtec teams worked hard to complete this deal, and I am excited by the opportunities ahead for Wabtec,” the GE’s CEO H. Lawrence Culp, Jr. said.

The merger of Wabtec and GE Transportation creates new opportunities for the unified company to combine product portfolios of both participants. The deal allows to join forces in manufacturing the railway equipment, to improve efficiency and productivity, inter alia, by implementing automated solutions, to increase value for shareholders. Wabtec estimates this year’s revenues of the combined company at more than 8 billion Dollars (more than 7 billion Euros).

“This is a once-in-a-lifetime opportunity to bring together nearly four centuries of collective experience to create a technologically advanced leader with a highly complementary set of capabilities to move and improve the world. Our teams have made significant progress in integration planning, and this process has only strengthened our confidence in the value creation potential of the combination,” the Wabtec’s CEO Raymond T. Betler noted.