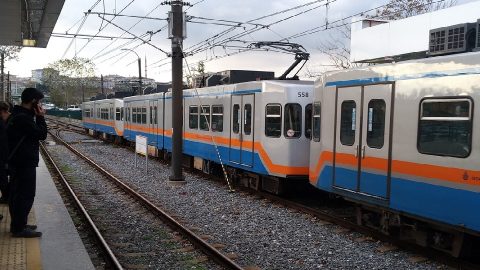 Two Istanbul airports to get metro link in 2019

The opening of the new stations will be accompanied with route changes in other modes of transport – buses, ferries, the Metrobus and trains running on the Marmaray railway. In this way, a seamless connection should be provided between the airports and the city centre.

Next year, four stations will be added to the Kadıköy–Tavşantepe metro line, which has been in service since August 2012. This allows for a connection of Sabiha Gökçen, the second busiest airport in Turkey, with the Asian part of the city. According to local authorities, the official opening ceremony is expected to take place on 29 October 2019.

Passengers flying to Sabiha Gökçen airport, which is located 35 kilometres from the city centre, will get a connection to the European part of Istanbul via ferries from Kadıköy station, with Metrobus from Ünalan station and with Marmaray trains from Ayrılık Çeşmesi station. Currently, they need take a bus or taxi in order to reach Tavşantepe metro station or other parts of the city.

Istanbul New airport, which was opened on 29 October, is also remote from the city centre; more than 40 kilometres and with only a bus connections into the city. The 37-kilometre Gayrettepe-İstanbul Yeni Havaalanı metro line will be completed next year. It is expected to enter service by the year’s end, with a stop at the new airport.

At Gayrettepe station, passengers will be able to change to another metro line or use the Metrobus service. Moreover, a second line to Istanbul New airport will be constructed in 2020. It will link the airport with Halkalı railway station that is projected to become the final destination of the Marmaray railway. This high-speed service is also planned to start in 2020.

The 115-kilometre Istanbul metro system has six lines and 89 stations. The first route was launched in September 1989, and in 2002 it reached Istanbul Atatürk airport, the busiest in Turkey. Istanbul authorities plan to triple the metro length to more than 350 kilometres by the end of the 2020s. Besides the Gayrettepe-İstanbul Yeni Havaalanı line, there are three other lines under construction, in addition to three other lines projected. Also, several extensions are being developed. The newest line of Istanbul metro was launched in December 2017 in the Asian part of the city.

As of the 7th of April, the new Istanbul airport is fully operational.Although as of today there is no train or subway, the construction is still underway.
For all your transportation needs in Istanbul please visit istanbulrides.com

The metro links with both Istanbul airports are scheduled to be opened at the end of October. Nobody tells about this spring