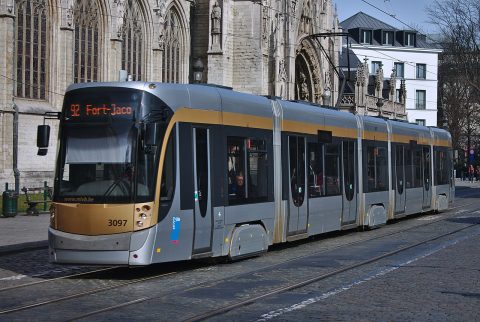 The Brussels Intercommunal Transport Company (STIB) will carry out major improvements to its public transport infrastructure this year. The works come on the back of a 23-percent increase in the number of journeys last year over 2021.

STIB started the year well with the start of construction of tram 10. This new 5.5-kilometre line will provide a fast, comfortable, high-capacity service between Rogier in the city centre and Military Hospital in Neder-Over-Heembeek. It has 10 new stops and has a potential between 1,600 and 2,400 passengers per hour during rush hour.

Following an impact study and a public enquiry, STIB received the building permit for tram line 10, on 10 November 2022. The initial phase saw maintenance and repair works carried out on the utility services. This week, the actual construction phase commenced, which will last until autumn 2024, when the first trams can run there. Brussels Mobility’s roadworks run parallel to those of STIB and are planned until 2025.

The work will require 3,150 metres of track beams, 134 prefabricated track modules and more than 400 intermediate precast slabs, as well as 5,000 square metres of bricks embedded in those modules, almost 1,900 metres of drainage trenches, more than 7,500 concrete sleepers and as many thousands of accessories for fixing and protecting the tracks.

STIB has also started renewing the tram tracks of line 92 on Avenue des Elisabeth. Simultaneously, the ‘Princess Elisabeth’ stop will also be made accessible to persons with reduced mobility. The need for track renewal in the Neerstallesteenweg also gave Brussels Mobility and the Uccle and Forest municipalities the opportunity to rebuild the entire road. Works began in mid-2022 and will continue this year with new phases towards the Sint-Denijsplein.

In rue Léon Theodor, STIB will start laying new tracks in June 2023. These works are necessary for the maintenance and safety of the infrastructure. The profile of the avenue will be completely revised and the public space will be redeveloped from façade to façade. In Anderlecht, the Wayezstraat yard is slowly coming to an end. Tram 81, which has been interrupted between Place Albert I and Marius Renard since the end of 2021, will return to its full route in spring 2023.

In terms of rolling stock, five new new-generation (TNG) trams will carry the first passengers by the summer. Twelve more trams will be delivered this year. In total, STIB ordered 90 of these vehicles, of which 79 are 32-metre-long and another 11 are 43-metre-long. “They are more comfortable, more spacious and more accessible, and will make it possible to serve new lines and replace part of the tram fleet,” said An van Hamme, STIB spokeswoman. “The first TNG trams were tested for several months in the depot and then on the network.”

Investments are also being made in the Brussels metro. Currently, 18 new M7 metros are in service. Four more M7 vehicles will be added in 2023, completing the first batch of 22 of the 43 metro trains ordered. They will operate on lines 1 and 5. This will free up metro cars of the ‘Boa’ type for passengers on lines 2 and 6. In 2023, manufacturer CAF will start construction of the second series of 21 M7 metro cars. Works to convert pre-metro to full metro on line 3 are also progressing well.

The final stop of tram line 51 at floor -1 in Albert station could be commissioned by the end of the summer. From then on, the tram will be able to continue its route beyond Level 100 and connect to lines 3 and 4. The STIB is also planning to increase the frequency of several bus and tram lines in the evening, during off-peak hours and in the early morning. This includes tram lines 7 and 25, as well as the bus lines that run to the city centre.

AccessiBus, an information system for passengers with reduced mobility installed 10 years ago on all bus lines, will be extended to the tram. With ‘AccessiTram’, travellers with reduced mobility get clear information about the accessibility level of STIB tram stops: independently accessible, with assistance, or not accessible. Line 7 will be the first to be equipped with this new information system and will soon be followed by lines 3 and 4. These lines all operate with T4000-type trams, which were recently equipped with portable access ramps. The T3000 trams will also be equipped with these in the near future.

STIB is also making its above-ground stops accessible by installing rubber edges to fill the space between the vehicles and the platform, and larger adjustments to stops are being made where necessary. Brussels Mobility is further equipping the metro and pre-metro with lifts. In 2023, Madou station (in spring) and Jacques Brel station (at the end of the year) will be equipped, bringing the number of stations with lifts to 55 out of 69. A more thorough renovation is taking place at Park and Central stations, also to improve accessibility, among other things.

The number of passengers on the STIB network increased steadily over the course of 2022. By the end of the summer, tram, bus and metro ridership had reached 84 per cent of the 2019 level. The return to normal has been particularly noticeable in off-peak hours and at weekends, where, since May, ridership has regularly exceeded 2019 levels, particularly on Sundays, early in the morning and in the evening, after 22.00 hours.

Finally, a new ticket will be introduced on 1 February: the 75-trip ticket. Valid on the STIB network only, for 90 days from the first validation, this ticket offers more flexibility to people who work from home and make 2 to 3 return trips per week on the Brussels public transport network. Additionally, from July 2023 onwards, those over 65 years of age in Brussels will benefit from an annual subscription at 12 euros, as will students and young people in Brussels. With this measure, the Region intends to continue its efforts to make public transport even more attractive and accessible to as many people as possible.

For more information about the Belgian rail market, check out our sister publications RailTech.be and RailTech.be/fr. Interested in exploring opportunities in Belgium? Join us in June at the RailTech Belgium conference and exhibition.