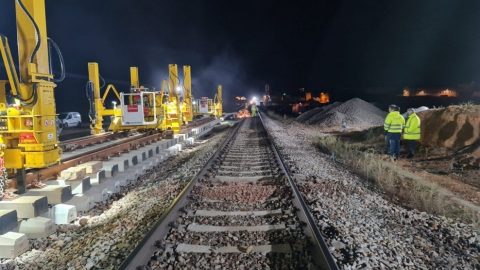 The status of the Mediterranean Corridor development works in Spain

Adif, the Spanish infrastructure manager, provided data on the development of the Mediterranean Rail Freight Corridor since 2018 for the four regions it will cross: Andalusia, Murcia, Valencia, and Catalonia. Once completed, the Mediterranean Corridor in Spain will run along the country’s southern and eastern coasts, continuing all the way to Hungary and crossing Europe from west to east – and back.

Spain has allocated over 4,4 billion euros in 300 actions to develop the Mediterranean Corridor between June 2018 and now. These numbers reflect the trend of one action per week, which is an unprecedented pace for Spain. According to Adif, “100 per cent of the preliminary studies have been completed and 75 per cent of the works are underway”.

These investments have surely paid off, as the data provided by Adif shows. In 2018, preliminary studies were carried out for 60 per cent of the projects, while today they are all complete. Moreover, construction of the projects was at 45 per cent, while, currently, it stands at 75 per cent. Significant efforts have especially been made throughout the first nine months of 2022. Over 1,5 billion euros have been tendered, 900 million euros have been awarded, and 450 million have been already executed.

The Mediterranean Corridor is one of the eleven Rail Freight Corridors in Europe appointed by the European Commission, which aim to form a strong European-wide network for competitive freight transport by rail.

A closer look to the trends in the four regions

What’s next for the corridor?

One of the key developments in the Mediterranean Corridor in Spain is the adaptation to high-speed of the rail section between Xativa and Nudo de la Encina, southwest of Valencia. After an investment of around 413 million euros, the route is currently being tested with a train that can run at up to 200 km/h.

Once the testing phase is over, the works for doubling the track can be carried out. The total investment for doubling the Xativa-Nudo de la Encina section is estimated at 187 million euros, with Adif claiming it has already assigned two procurements for the execution. This section is important because it will connect the peninsular southeast with the northeast and the rest of Europe.

A version of this article first appeared on sister publication RailFreight.com

Good question!
However, any such, simple, technicalities…, is for “brusselcrats”.
Questions raised from others, limited is – for “offers” – by separate bodies “RFC5”, etc… Pls read and understand!
(Any obvious “bottlenecks”, by standards no longer optimal, etc., as currently, decisively shall be “cemented”!)
Now, regrettably, Commission is disregarding Goal of “Union”…
Even worse, never no longer Goal of EU, is mentioned… (“Railways” is Goal…)